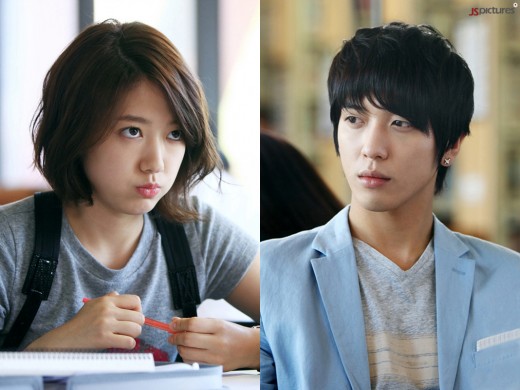 Park Shin-hye and Jung Yong-hwa play the roles of Lee Gyoo-won, the Korean zither prodigy and Lee Sin, the pretty boy band vocalist in the drama. It's been two years since 2009 SBS TV "You're Beautiful".

Jung Yong-hwa had a crush on Park Shin-hye in "You're Beautiful" which is also his debut drama. Their love never came true in the end.

Jung Yong-hwa said, "I was the quiet type to stand back, watch and do everything for her. I thought it was a cool character as a man but felt frustrated when I missed the chance to tell her how I felt".

He continued, "This time I have the role of Lee Sin who is a little bit a head of everything in terms of the crush and skills so I feel kind of good about myself and I'm curious about what will happen in the future.

Park Shin-hye said, "I was the receiving part previously but now I am the role who has to follow and respect Lee Sin enough to say that it's his revenge-plot".

"Heartstrings" is a mellow drama that draws the main characters' love and friendship in the background of an art school which has singing, dancing and culture. It is to be broadcasted on the 29th of June after "The Greatest Love".

""Heartstrings" Jung Yong-hwa is dominant over Park Shin-hye"
by HanCinema is licensed under a Creative Commons Attribution-Share Alike 3.0 Unported License.
Based on a work from this source