Heartthrob determined to go beyond his image 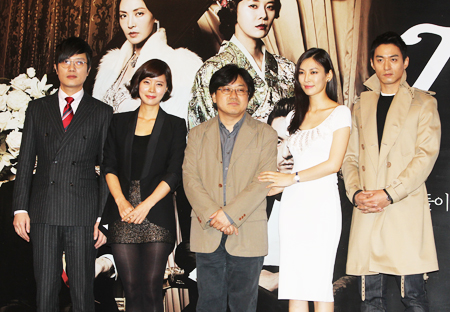 More than a decade into his career, Joo Jin-mo, 37, is still considered one of the best-looking faces in Korean cinema. He is also a victim of that image, however, incarnating one virile leading man after another.

Even in his newest film "Gabi" that opens today, he plays that tough-guy role again. Yet according to him in a recent Korea Times interview, working for this period piece set toward the end of the Joseon Kingdom (1392-1910) was a step into new territory as an actor, and an opportunity that could not go amiss.

"Already from the screenplay's first page, you can tell whether the genre, the character and other details are cut out for you or not. This time, the scenario was incomplete when I first received it. I thought I could really make the role my own", he said, pointing out the depth of his participation in the creative process with director Jang Yoon-hyeon ("The Contact", 1997 and "Hwang Jin Yi", 2007, among others). 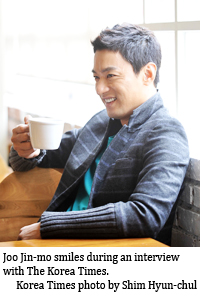 Before shooting, he secured and watched rare video footage of King Gojong (1852-1919), the 26th king of Joseon, riding on horseback through a town road escorted by Japanese occupation forces. What began as a simple exercise to get a feel of the period gave him the main idea for his role; he would become the leader of the occupying troops.

"I was inspired (by the clip) to create a sense of conflict between the king (played by Park Hee-soon) and me (Ilyich)", he said.

So, the character was modified to exaggerate his alien aspects, and dressed in imperial military uniforms instead of the traditional Korean costume, "hanbok". He would become a lover to barista Tanya (played by Kim So-yeon) instead of a simple accomplice to the royal assassination plot: he would slay his countrymen on behalf of the enemy and do just about anything to protect her.

Does this mean he will make his own film one day?

"I'm dying to. You have no idea", he said, almost cutting off the interviewer. "But the right opportunity needs to present itself, first".

For the moment, he said he is waiting for a new role, a complete departure from the brooding masculinity he has come to be equated with.

Perhaps it is for this history of typecasting he has suffered for over a decade that he yearns for something different, a symbolic work with which his name would be associated, even if the images are scarring.

"When anyone merely mentions the great Choi Min-sik, "Old Boy" has to come up", referring to the leading actor in the 2003 movie by Park Chan-wook that won the director the Grand Prix at the Cannes Film Festival in 2004. "I want to have that myself".

Only time will tell if a director will attempt to make a monster with such sultry looks but for now, Joo dreams of playing the everyman, something his appearance has prevented him from doing.

He said he wants films to be as inclusive as possible.

"I don't think cinema should be for a small society of experts", he said. "Movies aren't for just one person alone to enjoy but for the greater public. They are something everyone watches and grows old with.

"I hope my next movie will focus strictly on the chemistry between individuals - with me as one of them".

And to really mean it, he gave an uncharacteristically wide smile - with teeth showing. It was convincing.