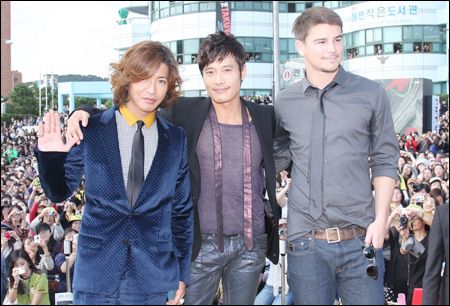 The three actors visited the 14th Pusan (Busan) International Film Festival (PIFF) to promote the new thriller "I Come With the Rain", directed by acclaimed Vietnamese-French filmmaker Tran Anh Hung. Tickets for the screening sold out in just 38 seconds ― breaking the record set by Lee Myung-se's "M" in 2007 ― when online sales opened.

Hartnett stars as an American detective hired to track down a rich businessman's missing son (Takuya) who has fled with the wife (played by Tran's wife, actress Tran Nu Yen Khe) of a Hong Kong mafia boss (Lee).

On Friday, chaos ensued as reporters from near and far struggled to enter the small press conference venue, which then became a battleground for frenzied coverage.

"It's my first time here and I wouldn't have been here if it were not for Mr. Lee Byung-hun. We felt very welcomed and hopefully we'll get more American actors out here next year", said Harnett.

Kimura said he was awed by the fervor of the festival, and his second visit to PIFF was particularly special because he was invited by Lee, a friend he felt proud of. The two met when Lee played a cameo role in Takuya's movie Hero. The Japanese actor said that he was initially hesitant about the project but such deliberation would have been unnecessary had he known that Lee and Hartnett would co-star.

Kimura said he felt star-struck when he met the 31-year-old "Pearl Harbor" star. Hartnett recalled meeting Kimura on the set in the Philippines after the Japanese actor spent the day shooting a scene buried in mud. "I was impressed by his professionalism", said Harnett.

He said he "was intimidated" when he met Lee, who was at the time sporting gym clothes that revealed a muscular build. But he wanted to set the record straight about a Korean-style sushi dinner Lee treated him to, teasing that it was due to politeness rather than lack of knowledge that he chose cheaper sashimi. "I was being polite", he said, adding that he enjoys Korean-style BBQ in New York.

Lee also showered his co-stars with compliments, saying that Harnett is a very down-to-earth person with a knack for making other people feel at ease and Kimura has very special charisma.

Tran, a winner of the 1995 Venice Film Festival for "Cyclo", expressed great satisfaction about working with the cast. "In the past I've only worked with actors I knew well. We spoke different languages, but it was not a problem. It was interesting and I made new discoveries as a director", he said.

Even though the international project was "like a nightmare" in the troublesome production process, he said he was able to pull through thanks to the actors. "The humanity that emerges from an actor is most important in casting", he said.

Kimura, meanwhile, said the film is unique in that it stimulates not only sight and sound but also taste and touch.

On Saturday, the men met fans in Open Talk, to discuss the movie and answer questions. Hordes of fans waited by the Haeundae Beach outdoor stage hours prior to the start of the 1 p.m. event. Many young women were seen camping out with sleeping bags since the night before.

"Heartthrob Trio Takes Busan by Storm "
by HanCinema is licensed under a Creative Commons Attribution-Share Alike 3.0 Unported License.
Based on a work from this source