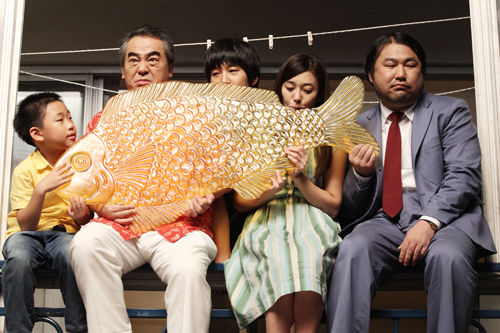 Korean comedy "Hello Ghost" became the third South Korean film this year to get a theatrical release behind the Great Wall of distribution barriers in China when it opened Nov. 24. Mega Films, which is in charge of "Hello Ghost"'s Chinese distribution, released the film on about 4,000 screens in Shanghai, Beijing and other cities large and small.

The other two South Korean films to get theatrical releases in mainland China were "The Man From Nowhere" starring Won Bin, which opened Sept. 16, and the animated film "Leafie, A Hen Into The Wild", which opened Sept. 30.
Directed by Kim Yeong-tak, "Hello Ghost" took in over 3 million admissions last year when local distributor N.E.W. released the film in South Korea on Dec. 22. Produced by Water n Tree Pictures, the heart warming comedy features Cha Tae-hyun ("Speedy Scandal", "My Sassy Girl") as a man who wants to commit suicide but finds himself besieged by a quartet of weird ghosts who want to use him to fulfill their wishes first.
International sales agent Finecut has sold the film to multiple territories including, most recently, to Asia Films for Japan last month. "Hello Ghost" has already opened this year in Taiwan, Singapore, Indonesia and Vietnam.
In addition, Finecut also negotiated a remake deal with Chris COLUMBUS' 1492 Pictures. Columbus, whose numerous credits include "Home Alone" and "Harry Potter and the Chamber of Secrets", is attached to direct the remake of "Hello Ghost". He will also produce it along with his 1492 partners Michael BARNATHAN and Mark RADCLIFFE.
"Hello Ghost" has also been travelling the film festival circuit including screenings at the Fantasia International Film Festival and the Hawaii International Film Festival earlier this year.

""Hello Ghost" walks through walls, opens in China"
by HanCinema is licensed under a Creative Commons Attribution-Share Alike 3.0 Unported License.
Based on a work from this source