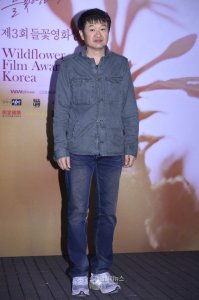 Melodrama auteur Heo Jin-ho is back with a new film titled "Happiness". Starring Hwang Jung-min ("Bloody Tie", "You are my Sunshine") and Lim Soo-jung ("I'm a Cyborg, But That's OK"), it is the tale of Young-su (HWANG) and Eun-hee (IM) who meet as patients in a sanatorium (an odd role-reprisal for LIM, previously confined to romantic encounters in a mental hospital in Cyborg).

Young-su had been living a carefree life in Seoul, running a bar and dabbling in love-affairs, when he was suddenly diagnosed with liver cirrhosis. Adjusting to life in the sanatorium, he meets Eun-hee, who is suffering from a critical lung-disease. They fall in love, grow happy and finally move in together. One year later, Young-su recovers from his illness and is thrown into a dilemma when his former girlfriend shows up.

Heo's previous films included "April Snow" (2005), "One Fine Spring Day" (2001) and "Christmas in August "(1998). Happiness is currently in post-production and is scheduled for an April release this year. Produced by Lie Films, with investment house M & F as the main financer, the film will be distributed by Showbox.

"Heo Jin-ho Brings us Happiness"
by HanCinema is licensed under a Creative Commons Attribution-Share Alike 3.0 Unported License.
Based on a work from this source