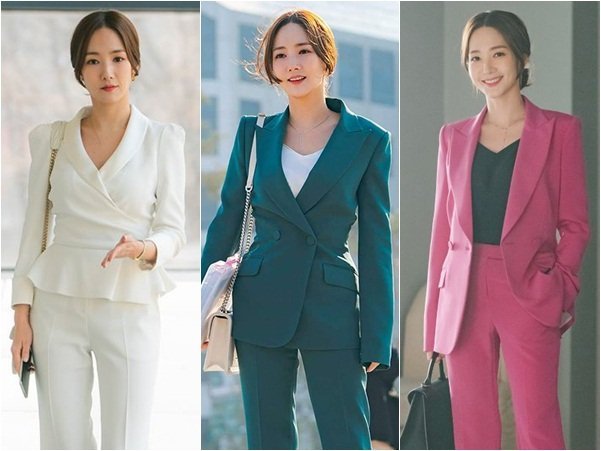 Park Min-young in the title role of "Her Private Life", in addition to "What's Wrong With Secretary Kim", combines professional characteristics and charm as a romantic comedy heroine with outfits that represent the office look.

Seong Deok-mi is a fangirl in her private life, but during the day she's an art museum curator with a good eye for art and thorough professionalism. Park Min-young expresses Seong Deok-mi with vivid-colored suits.

Stylist Kim Go-eun Bomi says, "Seong Deok-mi's professional tendencies had to be expressed more clearly compared to "What's Wrong With Secretary Kim". Pants suits are central in this drama. (In pre-surveys) It turns out curators prefer monotone suits, but the suits in the drama are based on primary colors considering the genre of romantic comedy".

Seong Deok-mi's suits have some masculine details, but she expresses an intelligent image that fits her professional character in a feminine mood. The suits emphasize the waistline to look more feminine with an angulated shoulder shape, and the semi-wide pants make the feminine look slightly intense.

Park Min-young chose custom made suits for Seong Deok-mi like she did in "What's Wrong With Secretary Kim".

Her stylist says, "Park Min-young's small figure limits the expression of character with items off-the-shelf. Before she started the drama, 60 to 70% of the suits were custom made by two brands that are sponsors".

The suit colors are calm and darker during auctions, and when she's involved with something energetic the suits are vividly expressed in pink, blue and green. There are black, white and other monotones.

The innerwear is also something that requires a lot of thought. The stylist avoided blouses, as Park Min-young wore plenty of them in "What's Wrong With Secretary Kim". Instead, she combined deeply cut V-line innerwear and neck-less innerwear to express Seong Deok-mi.

This emphasizes Park Min-young's lovely neck to shoulder line. She looks elegant without exposure and just her collarbones showing through the Y-lines. The stylist explained, "Just about enough effort was put on the neckline and earrings as to not draw too much attention".

"Her Private Life" has Seong Deok-mi leading the drama. Her pants-suits are symbolic as a tool for expressing feminized masculinity.

The suits, a combination of masculinity and femininity, are also a factor that reflects the current trend of the office look. This is why, despite the poor ratings, the 'Park Min-young Fashion' is so popular. 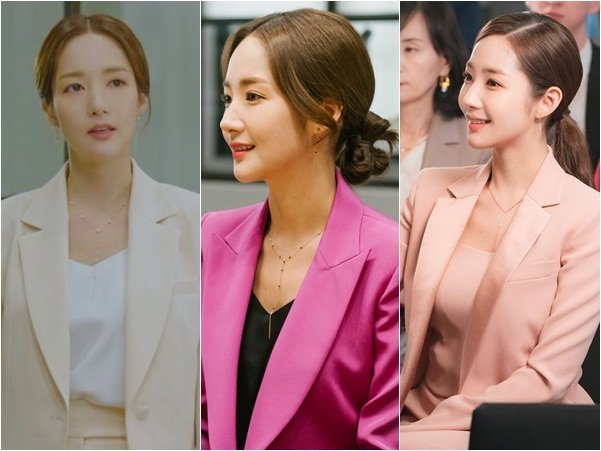 ""Her Private Life" Park Min-young's Custom Pants Suit for Curator Seong Deok-mi"
by HanCinema is licensed under a Creative Commons Attribution-Share Alike 3.0 Unported License.
Based on a work from this source