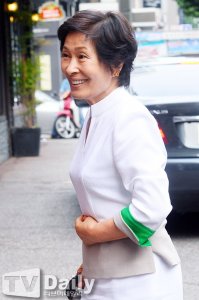 The experimental play, which constantly causes grief to the world of faith, plants total uncertainty and roils and divides audiences, has also won four Tony Awards including Best Play and Best Writer in 2005.

Set in 1964, a year after U.S. President John F. Kennedy was assassinated, "Doubt" depicts the world without certainty with a story of Sister Aloysius - a formidable nun who runs a grammar school in the Bronx - accusing Father Flynn of molesting some of the boys in the school.

Kim, one of the most admired actresses in the country for her everlasting acting talent and her passionate love of children, now takes the role of tenacious Sister Aloysius.

"From the beginning, I didn't like Sister Aloysius who stubbornly refuses to give up on Father Flynn's alleged misconduct. The character who never expresses her emotion seemed so tiresome for me. But it was the amazing script that made me do it", said Kim in an interview with The Korea Herald. Before the interview, the 64-year-old actress dressed in a distinctive black bonnet and robe was perfectly transforming herself onstage into a character who never laughs but is full of distrust and doubt.

"The character and a great amount of lines make me really tired. I don't even speak at all while at home in order to save my energy for the play", said Kim who debuted as a TV actress in 1962.

She has won a number of best actress trophies during her 43 years of acting career. Kim, however, confesses that the drama "Doubt" made her think again of her acting career and questioning whether she has done right.

"I thought that the acting talent is something that you are born with. But now I have realized, with this drama, that acting is something that requires you to pour endless efforts on each piece", said Kim. She went on stage for the last time in 2001 when appearing in the mono-drama "Shirley Valentine".

Kim notes that she has slowly come to understand Sister Aloysius.

"The woman was married to a man before she became a nun. It was her husband's death during the Second World War which turned her to see the world of uncertainty. I began to care for her and listen to her story", she said.

For Kim, however, acting seems just a part of her life now.

As a member of the World Vision, an international charitable institution, she has led another life where she shares her love with children in need around the globe.

"I was depressed for a long time but I came to think more positively after I began my trip to meet children all over the world. I am so excited to meet those children", said Kim who authored a book entitled "Don't hurt children even with flowers", which tells her wonderful experiences with children of innocence.

Questioned as to which she likes more, she gave an interesting answer.

She is now anticipating a visit to Africa next month for support of African kids.

"[HERALD INTERVIEW]Kim Hye-ja returns to stage with 'Doubt'"
by HanCinema is licensed under a Creative Commons Attribution-Share Alike 3.0 Unported License.
Based on a work from this source