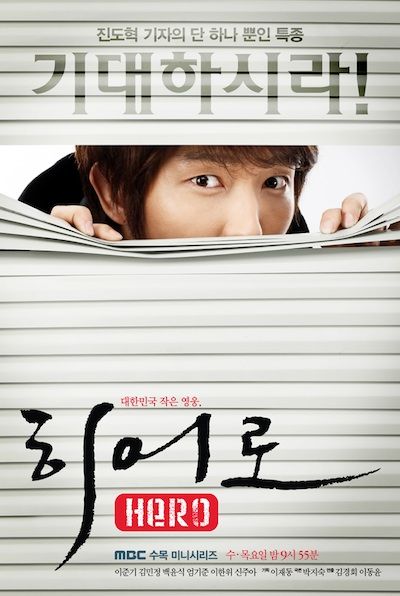 The teaser poster revealed on the 27th (Tues) shows Lee Joon-gi peering furtively through the blinds along with the tagline "Reporter Jin Do-yeok's most exclusive scoop is coming your way!" It immediately captures attention and raises expectations about the upcoming escapades of Jin Do-yeok.

The character Jin Do-yeok works for a suspicious third-rate newspaper "Monday Seoul". Once he decides on a target, he'll follow leads to the ends of the earth, never hesitating to do spywork, tail people, infiltrate or go undercover. The character matched perfectly with the concept to be used for promoting the drama, and so the teaser poster focuses on Jin Dohyeok looking for the latest scoop.

At the press conference held on the 23rd (Fri), Lee Joon-gi spoke brightly about his character, "The character Dohyeok recklessly bulldozes forward for a story. In his quest to protect the weak and uncover the truth, he'll even pretend to be paparazzi".

""Hero - Drama" Teaser poster"
by HanCinema is licensed under a Creative Commons Attribution-Share Alike 3.0 Unported License.
Based on a work from this source