High Cost of Living Drives Millennials out of Seoul 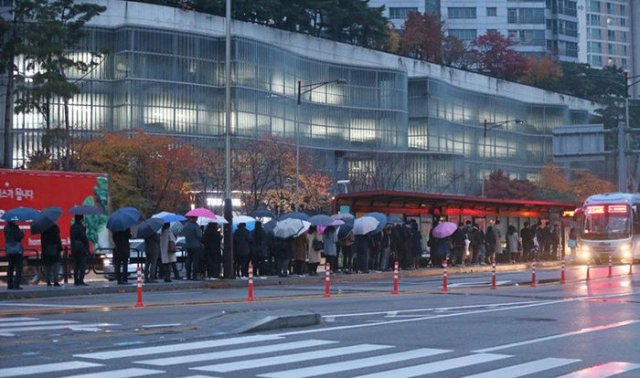 People wait for a bus in Hwaseong, Gyeonggi Province to commute to their workplaces in Seoul.

Seoul is experiencing a mass exodus of millennials who can no longer afford the high cost of living in one of the world's most expensive cities. There are still many people in their 20s moving to the capital to study and work, but the exodus has begun among people who have jobs and are raising children.

According to figures released by Statistics Korea last year, the number of 30-somethings leaving Seoul was 42,521 higher than of those moving to the city, accounting for a third of its net population loss. They were followed by those in their 40s (26,459) and those in their 50s (24,311). Since 2010, Seoul citizens in their 30s dwindled from 1.74 million to 1.54 million last year.

Refugees normally end up in the anodyne satellite cities around the capital. Gyeonggi Province surrounding the capital saw an inflow of 49,575 people in their 30s last year, the biggest increase in any age group.

A staffer at Statistics Korea said, "Young residents tend to move out of Seoul due to high housing prices and changes in their lives such as marriage and employment".

The exodus from expensive cities is part of a global trend. According to the Wall Street Journal, New York residents between 25 and 39 dwindled by 38,000 last year. Other large U.S. cities such as Chicago, Houston, Las Vegas and San Francisco were also experiencing sharp declines in the population of millennials.

In Toronto, Canada, millennial residents dwindled by more than 20,000 from 2012 to 2017. The reasons are manifold and often include the search for a better living environment and gentler pace of life. But in Seoul, the exodus is largely driven by soaring housing prices and living costs rather than a desire for a more leisurely lifestyle outside the big city.

Seoul was ranked the world's seventh most expensive city in a 2018 report by the Economist Intelligence Unit which analyzed the prices of 160 products in 133 major cities around the world, even though it was only 30th richest country in terms of per-capita income. Cho Young-tae at Seoul National University said, "This shows how difficult it is to live in Seoul, but there's a chance of a u-turn if home prices decline.