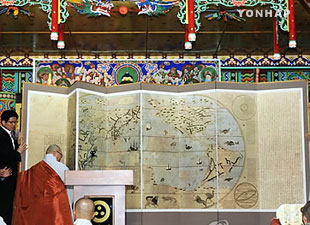 The provincial government of Gyeonggi Province has restored a historic world map which was destroyed in a fire in 1950.

The province on Tuesday held a ceremony to mark its donation of the restored map that dates back to Joseon Dynasty to Bongseon Temple in Namyangju. The temple had held the original map.

In May last year, the provincial government formed a team of experts, who completely restored the map based on a black-and-white picture of the map from 1931 and professional consultation.

The map, called Gonyeomangukjido in Korean, is Korea's first western-style world map. It was drawn in 1602 by Matteo Ricci, a missionary in China. A woodcut map was introduced in Joseon in 1603, and two manuscripts were produced in 1708 under the rule of King Sukjong.
Reported by KBS WORLD Radio