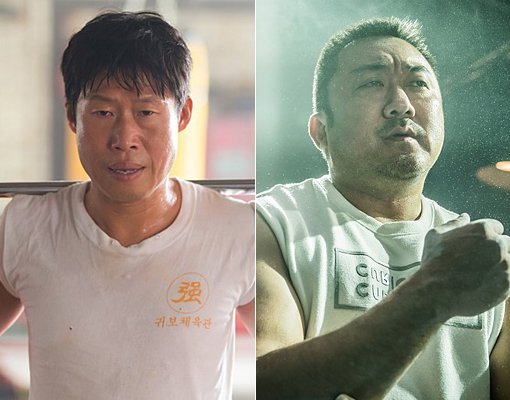 Two actors and their films set out to challenge Marvel's "Avengers: Infinity War" and they are Ma Dong-seok with "Champion" and Yoo Hae-jin with "LOVE+SLING".

"Avengers: Infinity War" has been virally popular ever since it came out on the 25th and even the cast that visited Korea said the movie was unrealistic. "Avengers: Infinity War" has gathered an audience attendance of 976,835 since its release. After setting a new box office record in the history of the film it became the fastest movie to reach the 1 million mark in two days after its release. The gale continues to blow as it broke the record for best Marvel opening in foreign film history.

In May, "Champion" and "LOVE+SLING" will enter theaters

Ma Dong-seok is starring in "Champion" coming out on the 1st of May. He's known for his successful past films such as "The Outlaws" and "Brother" and he is most anticipated this time as well.

"Champion" is about Mark, a Korean American who was adopted to the States when he was young and dreams of becoming an arm wrestling champion, finding his family in the process.

In fact, Ma Dong-seok was asked to an arm wrestling match by Hollywood star Dwayne Johnson.

A week later on the 9th, "LOVE+SLING" starring Yoo Hae-jin will release. Gwi-bo, a professional housekeeper devoted to his son, gets involved in unexpected circumstances.

Yoo Hae-jin has being in famous movies "Luck Key", "Confidential Assignment", "A Taxi Driver" and "1987". Na Moon-hee stars as his mother and other supporting actors such as Sung Dong-il, Lee Sung-kyung and more.

"LOVE+SLING" is the story of a father and son bonding together.

"Hit-makers Ma Dong-seok and Yoo Hae-jin Challenge the Box Office"
by HanCinema is licensed under a Creative Commons Attribution-Share Alike 3.0 Unported License.
Based on a work from this source