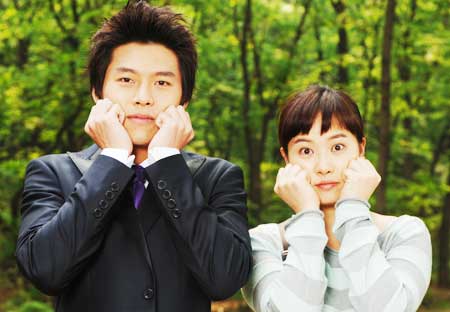 The 2005 television hit series "My Name is Kim Sam-soon" will be made into a play which will hit the stage from Jan. 21 at Sangmyeong Art Hall in Daehangno, central Seoul. / Korea Times file

"My Name is Kim Sam-soon", 2005's biggest hit drama with viewer ratings over 50 percent, will be revived on stage six years after the show ended on the small screen.

The Aka Company will present the theatrical rendition which portrays a hilarious relationship between a man and a woman, played by Kim Sun-ah and Hyun Bin, seeking true love, particularly focusing on the life of the single, career-driven and overweight female character in her late 20s.

The soap opera, based on a novel by the same title by Ji Soo-hyun, successfully appealed to audiences with its comical touch tinged with the characters' touching stories. The play aims to bring the essence of the original story to the stage.

"We will represent the 'Samsoon' syndrome again on stage, which drew much sympathy from the female audience", the company said in a press release.

Often dubbed as the Korean version of "Bridget Jone's Diary", the drama created a buzz with each episode, which made the actors and actresses high-profile celebrities. The female protagonist's profession - patissier - also became one of the most sought-after occupations.

The rendition of "My Name is Kim Sam-soon" is expected to ignite a theatrical trend of turning the television series into plays as "Lovers in Paris" and "Rude Miss Young-Ae Season 8" are to be adapted for stage versions.

"Hit 'Samsoon' takes to stage"
by HanCinema is licensed under a Creative Commons Attribution-Share Alike 3.0 Unported License.
Based on a work from this source