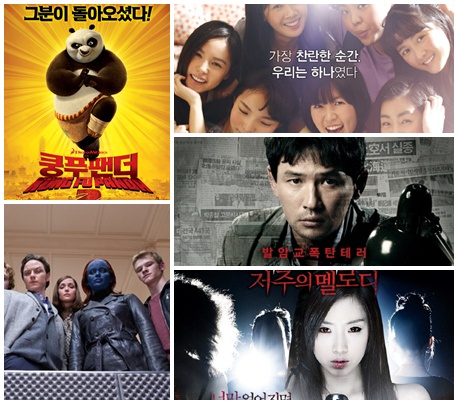 There has been a change of plates in the national box office where Hollywood used to eat into.

Korean movies that weren't even a match for the blind holes in Hollywood blockbusters are putting up a fight.

According to the ticket sales data by the Film Promotion Committee, Hollywood blockbusters had the upper ranking from the 10th to the 12th.

However, Korean movies are also counterattacking.

Korean movie "Sunny - 2010" at third place drew in 271,232 audiences this weekend and added to the accumulated number of 4,681,484 audiences, is attempting at breaking a million.

"Sunny - 2010" utilizes the 40s style, friendship and other materials that corresponds well with national customs smartly. Seeing that "Sunny - 2010" is continuously popular even among the mighty Hollywood production like "Kung Fu Pands 2" and "Pirates of the Caribbean 4", it sure is extraordinary.

Korea's first conspiracy movie "Moby Dick" and the first horror movie of the year "White: The Melody of the Curse" take fourth and fifth place, showing the potential energy of Korean movies.

"Pirates of the Caribbean: On Stranger Tides" has been pushed back to sixth place by Korean movies.

"Hollywood blind hole VS Chunmuro's defense"
by HanCinema is licensed under a Creative Commons Attribution-Share Alike 3.0 Unported License.
Based on a work from this source