Hong retrospective to be held at Harvard 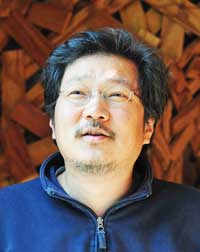 Acclaimed director Hong Sang-soo will be featured in a retrospective at Harvard University's Film Archive from Jan. 31 to Feb. 7.

Hosted in conjunction with the university's Korea Institute, the retrospective "Play it as it Lays" will screen eight of the director's 11 works.

Hong will also present his works in person on Feb. 4 and 5.

This is the film archive's third year to introduce a Korean director through the school. The archive featured Bong Joon-ho ("Mother - 2009") last year and Lee Chang-dong ("Poetry") in 2009.

The Korea Film Council supplied English subtitles to "The Day a Pig Fell Into the Well" and three other films for the event.

Born in Seoul in 1960, Hong studied filmmaking at Chungang University and earned degrees from both the California College of the Arts and the Art Institute of Chicago.

After returning to Korea, he taught screenwriting and began his filmmaking career. Since his first film, "The Day a Pig Fell Into the Well", he has been acclaimed as a prolific filmmaker both in Korea and internationally for his narrative style.