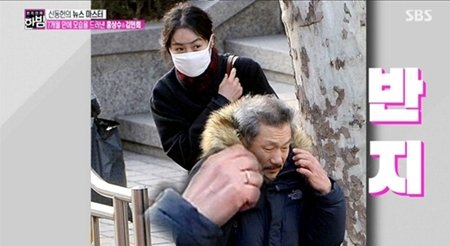 Hong Sang-soo and Kim Min-hee are still in the hot seat and they were spotted on a movie set recently.

The two came to surface 7 months after their scandal broke out. They were seen on the site of making a movie.

Apparently no one knew about this 'new movie' and sources couldn't reach any of them.

The management of actor Kwon Hae-hyo who filmed the movie with Kim Min-hee said, "The filming went on for about 3 days. Kim Min-hee wasn't even there until later".

However, a ring was spotted on Hong Sang-soo's finger. He's had it since the 25th of September at the San Sebastian Film Festival after the scandal between them broke out.

Meanwhile, Hong Sang-soo and Kim Min-hee met through the movie "Right Now, Wrong Then". Hong is currently going through a divorce with his wife.

"Hong Sang-soo and Kim Min-hee's couple ring?"
by HanCinema is licensed under a Creative Commons Attribution-Share Alike 3.0 Unported License.
Based on a work from this source