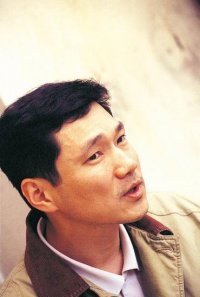 "Night and Day", the latest work of movie director Hong Sang-soo, has been selected to screen at the 58th Berlinale International Film Festival of Berlin, Germany, Feb. 7-17.

The complete list for the Competition program of the 58th Berlinale was announced Friday.

Hong's "Night and Day" is the story about a painter who has fled to Paris. Kim Young-ho plays the runaway artist while Park Eun-hye plays an art student studying in France. Hwang Soo-jung plays the wife of Kim and Lee Sun-kyun, a student from North Korea.

The director debuted in 1996 with the movie "The Day a Pig Fell Into the Well". Another Hong movie, "Woman on the Beach", starring actress Go Hyun-jung, was nominated for the Panorama section last year. He also made it to the Cannes Film Festival with "Woman is the Future of Man" (2004) and "Tale of Cinema" (2005).

"Night and Day" will compete for the Golden and the Silver Bear Awards along with movies such as: "Elegy" by Isabel Coixet (USA); "I've Loved You So Long" by Philippe Claudel (France/Germany); "Black Ice" by Petri Kotwica (Finland/Germany) and "Happy-Go-Lucky" by Mike Leigh (UK).

Other Asian films in the competition program include "Our Mother" by Yoji Yamada (Japan), "Sparrow" by Johnnie To (Hong Kong, China) and "The Song of Sparrows" by Majid Majidi (Iran).

A film of Korean-American director Dennis Lee, "Fireflies in the Garden", featuring top actors such as Julia Roberts, Ryan Reynolds and Willem Dafoe, will premiere at the Berlinale as well.

The opening film of the festival is "Shine a Light", the Rolling Stones documentary by Oscar-winning director Martin Scorsese To round off Michel Gondry's "Be Kind Rewind" will be screened.

Another Korean movie "Beautiful", directed by Juhn Jai-hong and starring Cha Soo-yeon and Lee Chun-hee, is included in the Panorama section.

"Hong Sang-soo's Film to Compete in Berlinale"
by HanCinema is licensed under a Creative Commons Attribution-Share Alike 3.0 Unported License.
Based on a work from this source