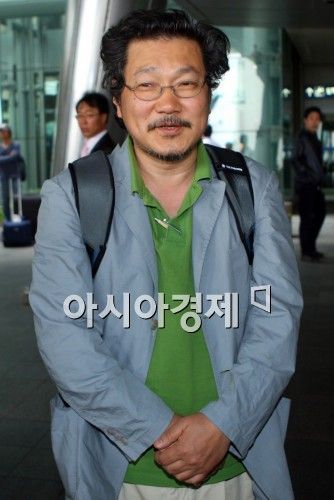 Korean filmmaker Hong Sang-soo will be attending the Venice Film Festival for the first time with his latest pic "Oki's Movie".

U.S. film publication Variety reported July 19 (U.S. time) that Hong's newest pic has been chosen as the closing film for the Horizons (Orizzonti) section of the festival, to be held in Venice from September 1 to 11.

This is the first time that Hong has been invited to the prestigious Italian film fest, which marks its 67th anniversary this year.

The director has made six trips to Cannes Film Festival, however, and was awarded the grand prize in the "Un Certain Regard" category for the film "Ha Ha Ha" earlier this year.

Hong's eleventh feature production "Oki's Movie", which stars Lee Seong-gyoon and Jung Yu-mi, is about a movie directed by a film major student, to be played by Jeong.

Hong is considered one of the most prominent filmmakers in Korea who is known for unique vision and originality. He has won international acclaim with his films which include "The Day a Pig Fell Into the Well" (1996), "Virgin Stripped Bare by Her Bachelors" (2000) and "Woman is the Future of Man" (2004).

"Oki's Movie" will be shown on September 11, on the last day of the festival.