Park Bo-gum recently held a fan meet in Taiwan while Gong Yoo was mobbed in Australia. Lee Dong-wook is up next with an Asian fan meet tour.

Thanks to the back-to-back success of "Answer Me 1988" and "Moonlight Drawn by Clouds", Park Bo-gum has a growing fan base outside of Korea. At a sold out fan meet of 4000 in Taiwan earlier this week, Park Bo-gum took things to the next level by bringing out his pal, Song Joong-ki, because real friends don't let you face an auditorium of rabid fans alone. It appears the two actors engaged in fan service while doing an archery challenge. 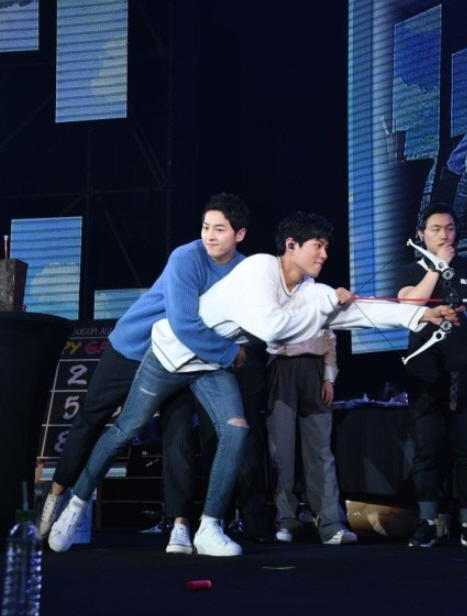 Meanwhile, Gong Yoo was already back at work on Wednesday after a reward vacation with the cast and crew of "Goblin" in Phuket. He is filming a CF in Sydney, Australia until this Sunday. Fans quickly found him and posted their close encounters with the actor online. Just do a search on any social media platform for '#GongYoo' and 'Sydney' to witness the madness. Gong Yoo looks a little scared, and I can't say I blame him; fans pressed right up against him, and in one case, grabbed him in an embrace.

Finally, coming off the high of "Goblin", Lee Dong-wook has announced a fan meet tour starting in Seoul on March 12. Additional dates and locations in eight Asian countries will be announced next week. Lee Dong-wook has admitted to being disappointed by the failure of his 2014 dramas, "Hotel King" and "Blade Man". 2015 wasn't much better with "Bubble Gum". So, Lee Dong-wook must be relieved by the massive success of "Goblin". Kudos to him.