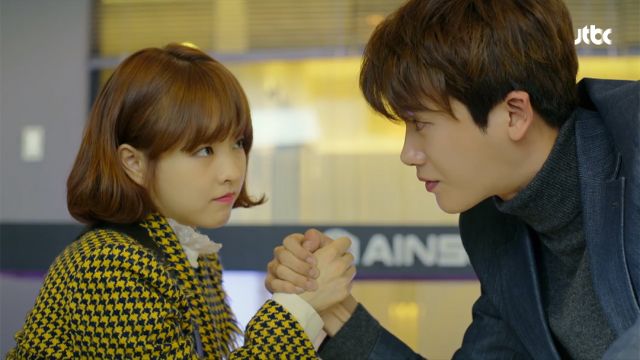 Is it Park Hyung-sik and Park Bo-young's fantastic chemistry, or a light-hearted storyline about a female superhero that's bringing in the viewers? Either way, the latest episode of "Strong Woman Do Bong-soon" garnered a rating of 8.3%, and is heading towards setting a new record for cable network JTBC.

"Strong Woman Do Bong-soon" tells the story of Do Bong-soon (Park Bo-young), a woman with superhuman strength who is hired as a bodyguard for Ahn Min-hyuk (Park Hyung-sik), the offbeat CEO of a games company who is being threatened by an anonymous source. Park Bo-young and Park Hyung-sik are a treat to watch as Bong-soon and Min-hyuk, and the light-hearted banter between them is my favourite part of the show. From the previews, it looks like the story will take a more suspenseful turn soon, as our heroes come up against the serial kidnapper terrorizing Dobong-dong. I'm looking forward to seeing these two bicker their way through saving the kidnapped women.

If "Strong Woman Do Bong-soon" continues the ratings trend, JTBC may have a huge hit on their hands, giving Park Bo-young her second drama hit, and Park Hyung-sik a home run on his first outing as a lead.