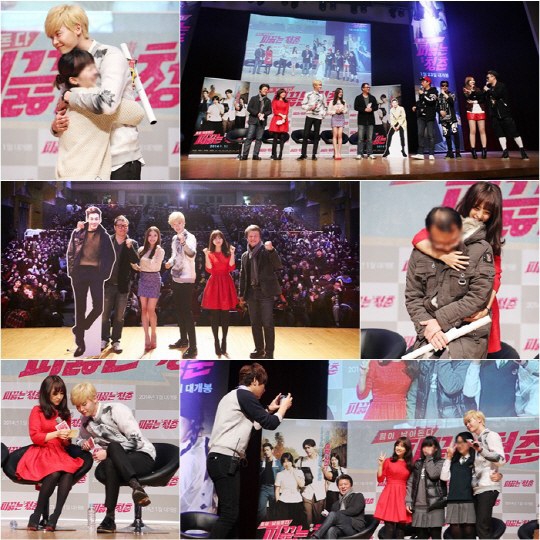 The "Hot Young Bloods Showcase" was held on the 9th at Gunguk University at 7PM. This was an invitation to those waiting for the movie to be released to attend and talk about the movie with Park Bo-young, Lee Jong-suk, Lee Se-young and Kwon Hae-hyo. The numerous media and expecting audiences proved the popularity of the movie.

The Brave Ones opened the ceremony with their hit songs and promotion videos of previews, character cuts and laughter was screened especially. The cast also kept everyone entertained with their hilarious jokes and comments.

Not only that, those who attended got a chance to take pictures with the stars and to hug them as well. Among the audience were many age groups.

The cast promised everyone that they would give out Free Hugs if their movie made it through 5 million audiences.

"Hot Young Bloods" will be released on the 22nd this month.

""Hot Young Bloods" showcase"
by HanCinema is licensed under a Creative Commons Attribution-Share Alike 3.0 Unported License.
Based on a work from this source