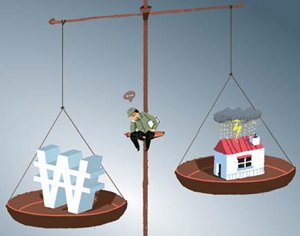 Household debt increased at the fastest rate in three years in 2016 due to a rise in the number of people taking out loans to buy new homes.

Economists warn that indebted households could face increasing financial pressure as their payments mount amid forecasts of interest rate hikes down the road.

Statistics Korea, the Bank of Korea and the Financial Supervisory Commission on Tuesday announced the results of their annual study of the finances of 20,000 households.

Every Korean household shouldered on average W65.6 million worth of debt as of the end of March this year, up 6.4 percent on-year and almost double the rate of increase.

Some 70.4 percent of the debt was from commercial banks, and 82 percent was housing loans. The average debt burden among indebted households reached W132 million.

The increase translates into a higher burden for households. The debt coverage ratio or DCR -- the amount of money households spend on servicing their debts -- stood at a whopping 26.6 percent as of last year.

That means households spent W270,000 out of every W1 million they earn to pay off their debts. The DCR stood at just 17.2 percent in 2011, when the government first began gauging such data.

Park Chan-kyun at Chungang University said, "If interest rates rise next year, we will see a surge in the number of households pushed to the limit. We need to take preemptive steps to ease the shock".

"Household Debt Rises at Record Pace"
by HanCinema is licensed under a Creative Commons Attribution-Share Alike 3.0 Unported License.
Based on a work from this source