How Stars Dress for the Red Carpet 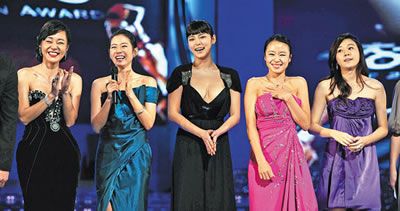 A glimpse of true glamour graced the red carpet at the Blue Dragon Awards last Friday, when Korea's most beautiful actresses wore some of the most stunning dresses the fashion world could produce.

The dress Jeon Do-yeon chose for the awards, where she won the Best Actress award, was a W10 million dress (US$1=W929) by Dior. She had worn a Ralph Lauren champagne gold dress for the Cannes Film Festival, where she also won best actress honors.

Before Jeon headed for France, several designers vied with each other for the privilege of dressing her amid rumors that she was likely to land the award. On the day of the festival, Jeon's stylist sent a text message to Korea: "She picked Ralph Lauren". The Ralph Lauren team in Korea, and headquarters in New York too, were reportedly delighted.

Kim Hye-soo is well known for choosing not just big-name foreign brands but also home-made ones like Kim Yun-joo and Kang Hee-sook. Jung Ryeo-won chose the less familiar French haute couture brand Jean-Louis Scherrer. It is said that she made the last-minute decision over a Louis Vuitton dress.

The stars usually start thinking about what they are going to wear more than a month before they walk down the red carpet, meeting with their stylists and representatives from various designers. Then a couple of dozen dresses ranging in price from anywhere between W5 million and W20 million make their way across the Pacific. They try on about 10 before choosing about three to have them tailored for the final. Thanks to the prearrangements by stylists and brand representatives, no actress will wear the same dress as another.

But the same dress can be worn by different stars at different events. The dress Park Si-yeon chose for the Blue Dragon was the same worn by Kim Ah-joong during a ceremony in Hong Kong. And the dress that highlighted Park's breasts was borrowed from Gucci's Hong Kong branch. It appears that as long as neither of them is in Korea, wearing the same dress is fine.

Many assume that the dress is later given to the stars as it already underwent various modifications to fit them. Surprisingly, however, every dress is returned to headquarters. They are a one-off, like Cinderella's ball gown. Now, some of these dresses are re-imported to Korea for sale as more and more customers are looking for the dresses worn by the stars. The Ralph Lauren and Gucci branch in Seoul have saw their sales go up thanks to the Cannes winner.

This column was contributed by Shin Kwang-ho, fashion news director of Vogue Korea.