Hwang Jung-eum, Kim Yoo-jung and Nana, Who Is the Next Rom-com Queen? 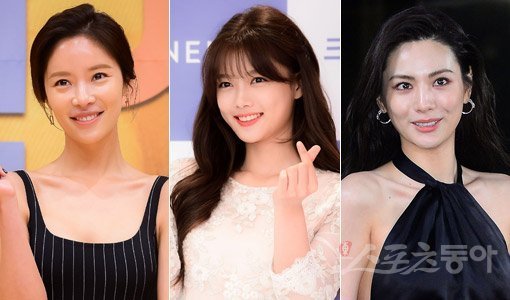 They are coming to dramas this summer

Hwang Jung-eum, a nonmaritalist in "To All The Guys Who Loved Me"

"Into The Ring" Nana, a life-oriented character

Actors Hwang Jung-eum, Kim Yoo-jung and Nana will come back with romantic dramas with comedy.

Among the three actresses who declare that they would present pleasant love rather than heartwarming love, Hwang Jung-eum catches the eye. This is due to the success of her love story with laughter. This time, the KBS 2TV Monday-Tuesday drama "To All The Guys Who Loved Me" which will premiere on July 6th, will stage a romance that mixes comedy, which is considered her specialty.

Hwang Jung-eum is a 'non-marriageist', but the two men who break the resolution appear in front of her and start a tangled relationship. She completes a pleasant romance with Yoon Hyun-min and Seo Ji-hoon at a time when she is active in love but has to refuse marriage. As a veteran of the romantic comedy genre, Hwang Jung-eum is also responsible for leading the two opposite actors. Yoon Hyun-min said, "I learned why Hwang Jung-eum is called 'rom-com' while working together. I feel her energy at every moment".

Kim Yoo-jung also heralds a transformation. In SBS's Friday-Saturday drama "Backstreet Rookie" which begins on June 19th, she challenges the unpredictable 'four-dimensional' character. The drama is set in a 24-hour convenience store, advocating unpredictable comic romance created by a part-timer full of 'wackiness' and 'unique' convenience store manager. Ji Chang-wook will work with Kim Yoo-jung on this play.

"Backstreet Rookie" is a new drama by director Lee Myeong-woo, who instilled a comedy craze with the drama "The Fiery Priest" last year. Kim Yoo-jung, who plays leading roles in dramas but has rarely experienced comedy acting, is also drawing attention to a new image she will show through her work with producer Lee. In addition to comedy, producer Lee Myeong-woo said, "I will draw the love story of the most ordinary young people".

'Nana"s "Into The Ring" is also worth paying attention to. She will star in KBS 2TV's Wednesday-Thursday series "Into The Ring" which will begin on July 1st and will try to become a life-oriented character, breaking away from the colorful image she has accumulated so far. 'Nana"s character has a strong living ability to work part-time jobs but also has a sly and pretentious attitude that she doesn't care about what people think, heralding a comical transformation in her acting.

Nana, a former singer, has already been recognized for her acting skills through the drama "The Good Wife" and the movie "The Swindlers". She, who is the 'queen of complaints' in "Into The Ring", leads the story of growing up and loving in the world she bumps into.

"Hwang Jung-eum, Kim Yoo-jung and Nana, Who Is the Next Rom-com Queen?"
by HanCinema is licensed under a Creative Commons Attribution-Share Alike 3.0 Unported License.
Based on a work from this source