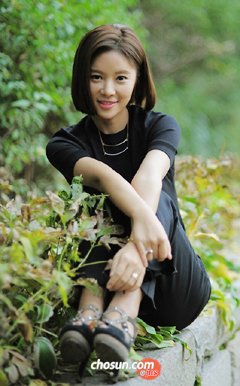 Hwang Jung-eum was voted the favorite TV actor of the year, according to a recent poll by Gallup Korea.

Gallup Korea asked 1,700 men and women aged 13 or above to name the two actors they thought shined the most in their roles in TV dramas this year. The poll was conducted across the country from Oct. 29 to Nov. 21.

Hwang made her debut in showbiz in 2002 as a member of the girl group Sugar, but left the group to pursue acting. Her breakthrough came in 2009, when she was cast in the MBC daily sitcom "High Kick Through The Roof", which was followed by a role in the SBS drama "Giant" in 2010. This year she enjoyed great popularity with her roles in the hit soaps "Kill Me, Heal Me" and "She Was Pretty".

Kim Soo-hyun came in second. He garnered a lot of support for his appearance in the KBS2 drama "Producers".

"Hwang Jung-eum Voted Favorite Actor of the Year for TV Series"
by HanCinema is licensed under a Creative Commons Attribution-Share Alike 3.0 Unported License.
Based on a work from this source