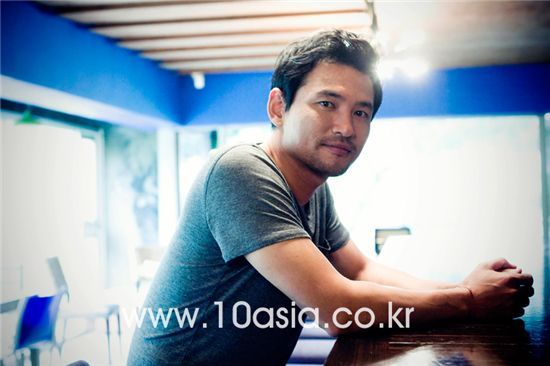 If you asked what actor Hwang Jung-min's biggest concern is, he would answer: “I want to be able to act better". This may be an incomprehendable to some actors whose acting need some real improvement, the ones who have issues such as not even able to pronounce their lines properly.

After all, this was the man who appeared as the charismatic boss of a gang in the film “A Bittersweet Life" (2005), the same guy who won rich praise from critics and viewers with his acting in film “You are my Sunshine" (2005) which he literally put his soul and might into. And that is how he came to say the famous line “I merely laid a spoon on the table. [He credited his win as best actor for his role in 'You are my Sunshine' to the film's director and crew.])” at the Daejong Film Awards -- yet that very man is worried about his acting right now.

“They're not worries about technical aspects. Don't we have concerns when we're in our 30s and new ones when you're in your 40s? It's similar to that. If most of the concerns I had during my youth were about how to pull off my character well, I worry about different things now.” Such worrying goes beyond him merely being able to understand and act out his character perfectly -- he wants himself as an actor to immerse himself fully into the story.

“When I was working on drama 'The Accidental Couple" (2009), people asked me whether the tight schedule was burning me out. But I actually felt more comfortable filming a drama because the shoots would just keep going on so I could just sleep on set wearing the clothes of the character I play, making it much easier for me to get absorbed into my role,” said Hwang. Like a Zen riddle, he also explained he wants to be able to act as if he is not acting and is currently looking for ways to reach that goal. But for Hwang, this is probably not just about the acting. Just like what people in their 20s and 30s worry about is different, Hwang seems to be preparing for a new leap in his acting career to suit his age. 10Asia therefore asked Hwang to recommend music that reminds Hwang of his life and his acting career he has paved for himself so far, the kind that brings back memories of his youth.

Hwang recommended Jackson Browne's “Load Out/Stay” as soon as 10Asia asked for music recommendations. Browne, who is often referred to as the troubadour of piano music, provides moments of deep speculation with his music. Hwang came across "Load Out/Stay" in Germany. “I was invited to Germany to watch musical “Line 1.” After the show there was a beer party. That was a rare gesture from the organizers who prepared it out of respect for the musical's writer and director Kim Min-ki. And then a member of the crew who had Browne's CD on him, played the song. So we ended up singing to the song, arm in arm. It was an unforgettable moment.”

When Hwang spoke of director Kim Min-ki, 10Asia asked Hwang to recommend his favorite among Kim's songs as well. “But Mr. Kim wouldn't like having his music recommended like this,” Hwang said with a hesitant smile, probably because he did not want to be even the slightest trouble to the man who was his teacher when he was in his 20s and also a great musician whose song “Morning Dew” swept the whole country in the 70s. Hwang took his time choosing “Bongwoori (mountaintop)” among the many songs in Kim's album “Past Life of Kim Min-ki.” “The acting experience I got from 'Line 1' had a great impact on my life. I believe the reason I managed to stay in the film business this long is because of that experience. So Kim's music energizes me in that sense, especially 'Bongwoori'".

The third album Hwang recommended was the soundtrack to 1996 film “Le Huitieme Jour (The Eight Day).” “It's a story of friendship between a patient with Down's syndrome and a man who teaches business techniques,” Hwang said calmly. “When you get past your youth, you start thinking more about work and life. This is what happens to the main character in 'Le Huitieme Jour'. That he needs to become responsible of others while become less innocent. The movie showed that which was very moving. The movie got me thinking about how we all start thinking about such things as well when we pass our youth. I can still hear the main theme of the movie in my mind.”

Who could talk about their youth in the 90s without mentioning the legendary folk rock singer Kim Kwang-seok? It has been a while since the rocker passed away yet he continues to stand in the center of Hwang's memory. “I love all of Kim's performances. I even took on a part-time for his concerts. I was only a student at the time and I still remember how everything looked. Once he was performing in the Daehangno district and there would be lines all the way outside the concert building he would be performing at. Because people kept coming in all the seats were filled up instantly leaving many others to sit on the aisle all the way up to the stage. In the end, the concert hall became so packed that the only space left was a place for rocker Kim to sing. So during the performance Kim had himself surrounded by his audience".

“Actor Ryoo Seung-bum is really good at singing 'Falling in Love Again', Hwang said with a laugh. He chose Bobby Kim's album, especially the song “Falling in Love Again (Featuring Kim Young-geun)” as his final music choice. Bobby Kim is musician who has covered wide genres of music starting with reggae then hip hop, R&B and ballad and made it into his own style. He is also one of the musicians that best represent the sentimentality Korean men feel. “In the song, a whale appear in search of something and while it has hope for it, it also gets hurt as well in the process seeking for that dream. It's just like our life. But the answer probably lies within that searching process.”