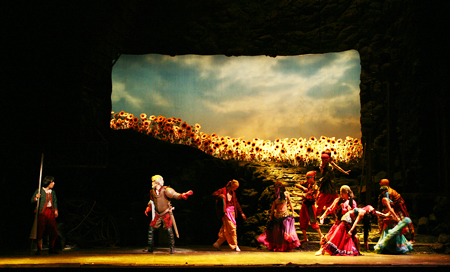 A scene from the musical "Man of La Mancha", which has cast Hwang Jung-min as Don Quixote / Courtesy of OD Musical Company

Hwang Jung-min will return to the stage in the role of Don Quixote in the musical "Man of La Mancha" from June, at the Charlotte Theater in southern Seoul.

His previous stage credit includes Guido Contini in "Nine" (2008) and Robbie Hart of "The Wedding Singer" (2009). Most recently, he starred in the movie "Dancing Queen" with Uhm Jung-hwa.

Veteran musical actor Seo Bum-suk and 30-year-old Hong Kwang-ho will alternate in the role with Hwang. Seo currently plays Yu-bong in homegrown musical "Seopyeonje" and Hong is known for his portrayal of the Phantom and Raoul in "The Phantom of the Opera" and Jekyll in "Jekyll and Hyde".

Aldonza, or Quixote's lady Dulcinea, will be played by actresses Lee Hye-kyung and Cho Jung-eun. Lee, Christine in "The Phantom of the Opera", starred as Aldonza in the 2005 and 2010 productions of "Man of La Mancha" and returns to the role this year. Cho is a diva from "Spitfire Grill" and "Zorro" and expected to break from her graceful image with this part.

With the script by Dale Wasserman, lyrics by Joe Darion and music by Mitch Leigh, "Man of La Mancha" is inspired by Cervantes's "Don Quixote". The play-within-a-play begins in a dungeon and transforms into a field with sunflowers as Cervantes stages his work with the prisoners in the dungeon.

"Man of La Mancha" is critically acclaimed in Korea and scooped five trophies at The Musical Awards in 2008, including Best Licensed Musical.

"Hwang Jung-min to play Don Quixote in musical"
by HanCinema is licensed under a Creative Commons Attribution-Share Alike 3.0 Unported License.
Based on a work from this source