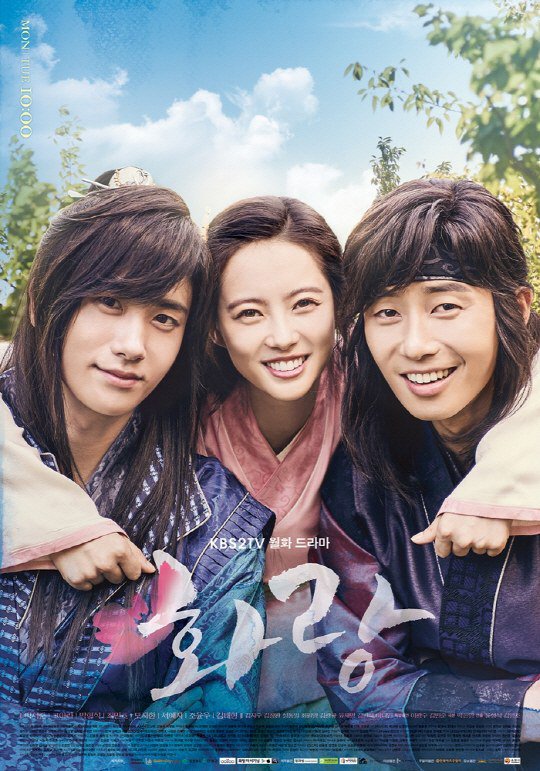 The new KBS 2TV drama "Hwarang" is coming on the 19th of December. Some of the best actors and actresses are attempting at the most anticipated drama of the second half of 2016.

A poster of three guys and girls was released on the 5th. The three are Park Seo-joon (Moo-myeong / Seon-woo), Go Ara (Aro) and Park Hyung-sik (Sam Maek-jong).

Go Ara is in the middle with her arms around the other two. They are all smiling at the camera.

This poster shows the relationship between the three. Go Ara shows outstanding chemistry with the two guys and Aro is different from ordinary girls. She's positive and cheerful.

Park Seo-joon plays Seon-woo who can be feisty and free at the same time. Park Hyung-sik's role of Sam Maek-jong wants to be free from the fate of the king.

The romance between the three is expected to be affectionate and dear. This winter, the drama will brighten up the homes of those watching "Hwarang".

Meanwhile, "Hwarang" is based in the Shilla times 1,500 years ago about flower knights who existed back then. The drama is 100% pre-produced and the making finished in September.

""Hwarang" unveils Park Seo-joon, Go Ara and Park Hyung-sik poster "
by HanCinema is licensed under a Creative Commons Attribution-Share Alike 3.0 Unported License.
Based on a work from this source