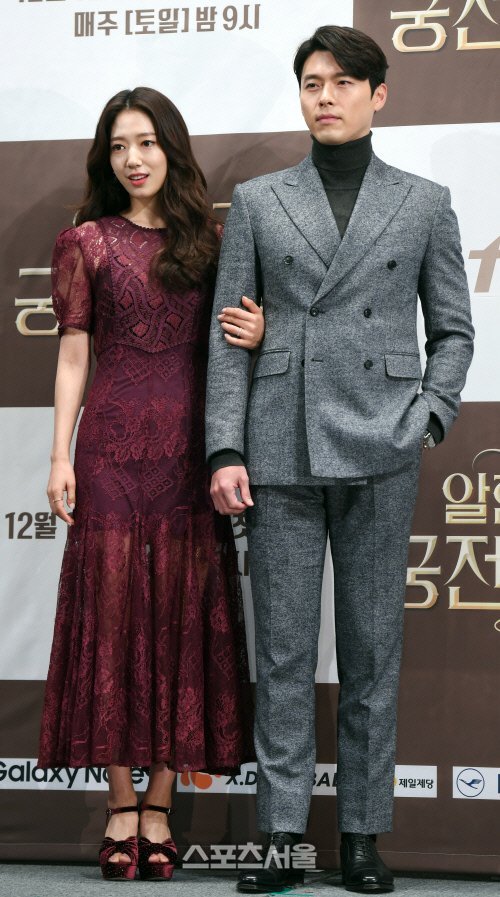 Park Shin-hye (left) and Hyun Bin pose at a press junket for their new TV series "Memories of the Alhambra" in Seoul on Wednesday.

Hyun Bin and Park Shin-hye will co-star in a new series on cable TV channel tvN starting this weekend. It is the very first time the two have worked together in a drama despite their nearly 15-year careers in showbiz.

"Memories of the Alhambra" is notable for its focus on augmented reality technology. Hyun plays the head of an investment firm who takes a business trip to Granada, Spain to check out a new AR game developed by an anonymous programmer. There he meets Park's character, who works as a local tour guide while running a hostel at which he stays, and they get involved in game-like incidents.

Speaking at a press event in Seoul on Wednesday, Hyun said, "There were some unexpected difficulties during shooting as it deals with unfamiliar subject matter. I knew almost nothing about AR games but now I'm like an expert".

The stars hit it off easily, although it was their first collaboration.

Park said, "We didn't have time to get to know each other before we started shooting in Granada. But we quickly grew closer as we spent much time together in a foreign city. When we weren't shooting, we often shared our thoughts about work over beers".

Hyun said, "Park is a really nice, bright person, bringing good energy to filming locations. She's already a veteran, as she started acting at an early age [of 13] and knows how to deal with anything that happens on location".

Netflix purchased the rights to the series, which cost some W20 billion to make (US$1=W1,129). Episodes will be available on the video streaming site one hour after they air on tvN. The drama's producer, Ahn Gil-ho said, "Due to the global popularity of computer games, I expect the series will draw a lot of attention in the international market".

"Hyun Bin, Park Shin-hye Team up for 1st Time in New TV Series"
by HanCinema is licensed under a Creative Commons Attribution-Share Alike 3.0 Unported License.
Based on a work from this source