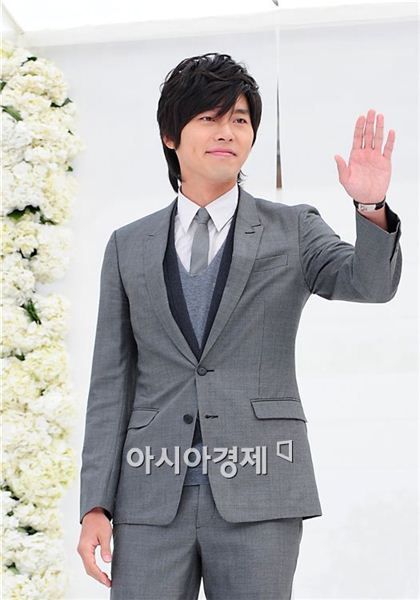 Actor Hyun Bin has been cast as the new male lead of upcoming SBS TV series "Secret Garden", replacing Jang Hyuk who has pulled out from the show for reasons relating to his agency.

An official with the drama told Asia Economic on Tuesday that Hyun Bin will take on the role of a finicky heir to a conglomerate in the fantasy melodrama also set to star actress Ha Ji-won as a stunt woman.

"Secret Garden" will mark Hyun Bin's return to the small screen in a year -- his last acting gig was in drama "Friend, Our Legend" in mid-2009.

While the upcoming show has attracted attention for its creators -- producer Sin Woo-cheol and scenarist Kim Eun-sook, the mastermind duo behind hit shows "Lovers in Paris" and "On Air" -- it has raised eyebrows in regards to its casting.

Jay Park, the leader of former boy band 2PM, was in talks with producers to play the role of gifted singer in the show but negotiations fell through at the last moment. A replacement has yet to be found.

Then Jang Hyuk, managed by the same agency as Park, SidusHQ, cancelled his appearance in the drama as well.

Actress Kim Sa-rang, also with SidusHQ, was rumored to be set on withdrawing from the "Secret Garden" but she, along with actor Yoon Sang-hyun, are said to have made no changes to their decisions to appear in the show.

Hyun Bin, whose real name is Kim Tae-pyung, rose to fame after starring in smash hit series "My Name is Kim Sam-soon" alongside actress Kim Suna in 2005.

He has been dating top Korean actress Song Hye-kyo, his co-star of KBS series "Worlds Within", since mid-2009.

"Hyun Bin replaces Jang Hyuk for "Secret Garden""
by HanCinema is licensed under a Creative Commons Attribution-Share Alike 3.0 Unported License.
Based on a work from this source