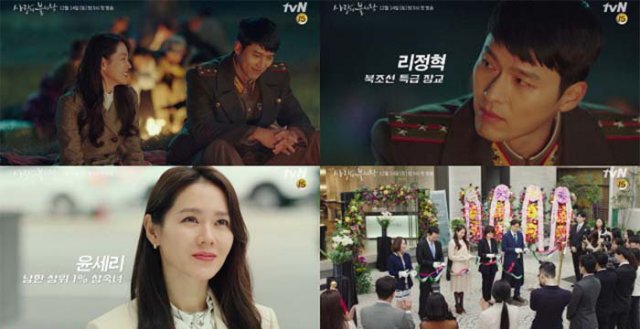 Hype for the upcoming TV series "Crash Landing on You" starring top actors Hyun Bin and Son Ye-jin continues to build with the release of teasers for the show on Tuesday.

The melodrama, which is set to begin airing on cable channel tvN on Dec. 14, has drawn much attention due to the casting of the pair, as well as its script by Park Ji-eun, whose credits include "My Love from the Star" and "The Legend of the Blue Sea".

The series revolves around a South Korean heiress who makes a forced landing in North Korea while paragliding, and a North Korean officer who falls in love with the woman while trying to hide and protect her.

"Hyun Bin, Son Ye-jin's New TV Series Teased"
by HanCinema is licensed under a Creative Commons Attribution-Share Alike 3.0 Unported License.
Based on a work from this source