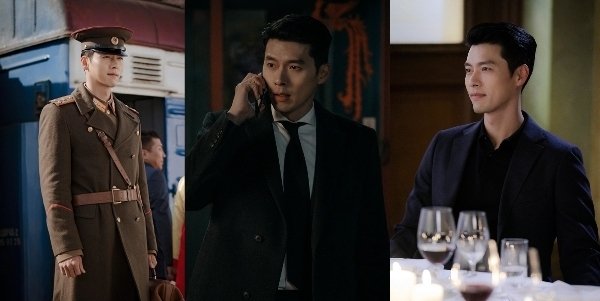 Actor Hyun Bin has caused another sensation in Asia.

The actor recently played the greatest character of his career; Ri Jeong-hyeok in "Crash Landing on You" and he's still got Asia in a frenzy even though the drama is over. He's always been noted for his deep acting, but his romantic performance in this drama is exceptionally special.

His character, Ri Jeong-hyeok, earned the nickname 'God's favorite' for his outstanding looks, and as his feelings for Yoon Se-ri (Son Ye-jin) developed, he turned into a sweetheart in every episode.

He didn't just stop in expressing his character so perfectly, but he let out the special talents he gained through his past romantic works and lit a fire in the hearts of every woman in every age range.

Hyun Bin increased the character's charm 200% by being reliable for Se-ri, remembering every tiny thing she says, being considerate of Se-ri's feelings by showing her his feelings instead of just talking, confessing to her under intoxication and being so pure-hearted in front of the piano, and more.

As for the genre of the drama being more of an ideal fantasy, which could appear cheesy, Hyun Bin increased the immersion in it with his performance. Because of the concept that he's a North Korean soldier, he had to say all his lines in the Northern dialect, but managed to pull off every scene with this challenge.

Hyun Bin's character won the hearts of fans all over Asia, not just Korea. Even after the drama, Asian fans have been spreading the love all over the Internet. He's topped the Chinese social media metrics and was featured in main frames of major Chinese media, as well as other overseas media.

Hyun Bin chose director Yim Soon-rye's "Bargaining" as his next piece of work and fans look forward to his hard work in the year 2020.

"Hyun Bin Strengthens His Reputation as a 'Rom-Com God' Through "Crash Landing on You""
by HanCinema is licensed under a Creative Commons Attribution-Share Alike 3.0 Unported License.
Based on a work from this source