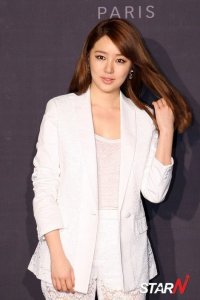 The answer to the popularity of the Korean drama "Coffee Prince" is Yoon Eun-hye's brilliant performance as the main character, a girl disguised as a guy. The way she wears her hair, talks, walks, and eats in the drama is far from girly. Her acting is so convincing that Dong-A was tempted to ask if she used to be mistaken as a boy when she was a baby.

"Not once", she replied. "I am actually the eldest daughter. When I first got the part, many people were worried whether I would make a good 'boy' material. In order to be 'Eun-chan (the main character)', I tried to learn male gestures. I am not just talking about hand gestures. I even observed the way men use their finger tips, finger nails, hair and eyebrows to express their thoughts. When I studied their everyday life postures, I noticed that they kept their legs apart when sitting down and walking. I also noticed that they let out heavy breath in between words when they speak. I emulated a laid-back type of a guy instead of a gentleman".

At a time when young actresses eschew roles that do not appeal to their beauty, Yoon's confidence as an actress is truly admirable.

"If I was afraid of the part, I wouldn't have done it in the first place. I feel loved by many fans even if I don't try to look pretty and girly".

Yoon, in person, is not even close to resembling a guy. Would many fans still enjoy watching the drama if the actress really does look like a man? The drama is a success not because it has a character who pretends to be a guy, but because Yoon plays the part so well. Her large and kind-looking eyes coupled with her amiable and cute facial features add up to create a good-looking 'Eun-chan', loved by many viewers nationwide.

Her fashion in the drama is dubbed as many young women worship "tomboy fashion" consisting of a shaggy haircut, loose-fitting shirts, and casually worn sneakers. It is also regarded as backlash to the society which puts too much emphasis on looking feminine, sexy and glamorous.

"I think it's not that I am wearing them that the style looks good, but that the style is so natural and comfortable. I usually wear jeans and T-shirts too, but I have my own secret of pulling out a feminine image with casual items. Obviously, 'Eun-chan' doesn't know my secret".

All the dramas she starred in became big hits such as "Princess Hours" (MBC) and "The Man of the Vineyard" (KBS). Although she is regarded as a 'hit-maker' nowadays, some point out her lack of acting skills. Others even pointed out that her success is attributable to her ability to pick a part that is just right for her.

"No actress is perfect. I believe my strength is the ability to immerse in my character. Whenever I finish shooting for a drama, I still dream about acting the character since it is so grown on me. Acting skills are important, of course, but I think understanding and becoming the character is more vital in being a good actress. I only think about the character, what she is like and what she can do in the story".

When Dong-A told her she seemed confident as Eun-chan, she immediately softened up and brought up the " crying " scene story.

"Do you remember the scene where Eun-chan cries on a bus? That was a difficult scene. I wasn't as immersed as I should be and I didn't really know how to control emotion at that moment. I ran out of tears after taking the same scene over and over again. I can't really say what kind of parts I want to play because I don't have much experience yet. But I know that there are many opportunities waiting for me out there".