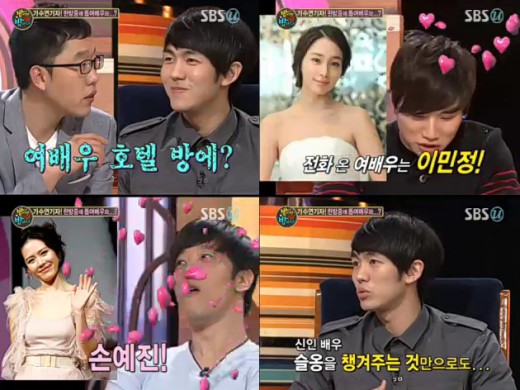 In the SBS TV program "Every Night" on the 11th, MC Kim Je-dong asked Im Seulong if he went to a hotel room with an actress and he answered 'yes'.

The MC continued, "Didn't the actress call you first? And did you go to another actress' room with that actress?" and Im Seulong admitted it.

According to Im Seulong, actress Lee Min-jung called him first and went to Son Ye-jin's room together, talking and drinking wine until late night.

"I met Son Ye-jin the previous day on the red carpet. We are close so I said hi and she asked why I was there and said we should meet up for dinner or something" recalled Im Seulong.

About Lee Min-jung and Son Ye-jin he added, "Just taking care of a rookie actor like me, these top stars are loyal and easygoing".

Meanwhile, Ok Taecyeon (2PM) picked Ha Ji-won as his female type and acted out one of the best scenes from SBS TV's "Secret Garden" on the spot with Daesung in "Every Night".

"Im Seulong confesses "I met Lee Min-jung and Son Ye-jin in a hotel room"
by HanCinema is licensed under a Creative Commons Attribution-Share Alike 3.0 Unported License.
Based on a work from this source