"In Love and the War" Press Conference in Seoul 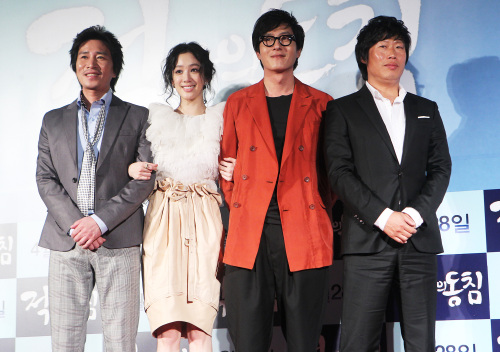 From left: Actor Shin Jung-geun, Jung Ryeo-won, Kim Joo-hyuk, and Yoo Hae-jin at a press conference promoting their upcoming film, "In Love and the War" at Megabox Dongdaemun in Seoul, Wednesday. (Yonhap News)

Stars Shin Jeong-geun, Jung Ryeo-won, Kim Joo-hyuk and Yoo Hae-jin attended a press conference promoting their upcoming film, "In Love and the War" at Megabox Dongdaemun in Seoul earlier this week. Bae Se-yeong, who wrote the script for the film,based the story on her grandmother's experiences during the Korean War, reports The Korea Herald.

The newspaper describes director Park Geon-yong's "In Love and the War"as "a tale of ideology-transcending friendship between communist soldiers and country farmers with caring heart".  The movie opens in theaters in Korea on April 28.

The Korea Herald writes that  "actress Jung Ryeo-won, who is widely known for her sense of fashion, stars as the town's confident school teacher…Playing a country woman in the 1950s, Jeong had to wear only one piece of costume throughout the film, with no make-up".

Jeong told reporters: "Of course every actress wants to appear attractive in their films, but I understood the intention of director Park after watching the footage. I learned a lot through this experience".

Park said the charm of "In Love and the War" is that it contains a great sense of humor while talking about national tragedy, the newspaper reported.