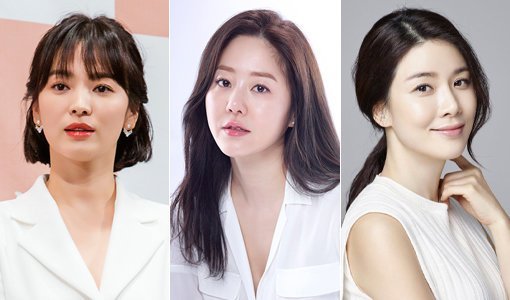 The Box Office Queens are back. Song Hye-kyo, Go Hyun-jung and Lee Bo-young are coming back each with different star writers. They are planning to change their images based on strong themes such as revenge, tragedy, and betrayal in leading dramas. They are determined to move away from the melodramatic genre that they have introduced so far and reach viewers with new charms. Expectations are high that their performance will further enrich the female narrative at the home theater.

Song Hye-kyo reunites with writer Kim Eun-sook from the 2016 KBS 2TV drama "Descendants of the Sun" with an 8-episode drama called "The Glory". It is helmed by Ahn Gil-ho who produced the tvN drama "Secret Forest". All box office hit-makers are gathering together in one place.

It tells the process of revenge on perpetrators and bystanders after a victim of school violence becomes an adult. The biggest viewing point is also Song Hye-kyo's challenge. She puts aside her lovely images for a while and transforms herself into an incarnation of revenge which is filled with desperation.

The production team will start filming as soon as they finish casting the main and supporting roles. As the subject itself is feared to spread to a 'spoiler', it has been preparing for the drama since the middle of last year, keeping all details and settings secret. It is expected to take time for the pre-production drama to be aired.

Go Hyun-jung is soon going to begin filming the JTBC drama "A Person Similar to You". She is a painter who successfully married a rich man. The main character's upheaval in her 30s and 40s is the core of the drama, and she was cast early in the planning stage. She is determined to confirm the charm of heavy acting once again.

Along with Shin Hyun-bin, her co-star, she is expected to fill the story with jealousy, envy, passion and betrayal toward each other. Shin Hyun-bin is also expected to give a boost to the story as she has recently received fresh attention in the small screen. Yoo Bo-ra, who boasted delicate sensibilities with KBS 2TV's "Secrets" will be in charge of screenplay.

She's coming back with tvN's "MINE" which airs in May. She reunites once again with writer Baek Mi-kyeong from the JTBC drama "Strong Woman Do Bong-soon". It captures the changes of women in chaebol families around mysterious events.

It is also eye-catching that both the director and major characters are female. Director Lee Na-jeong of KBS 2TV "Fight My Way" will direct the drama. Actors with strong personalities such as Kim Seo-hyung, Ok Ja-yeon and Ye Soo-jung also join the cast. Lee Bo-young, who plays the daughter-in-law of a chaebol family, depicts a self-reliant female character who she consistently played on tvN's "Mother - Drama".

"Incarnation of Revenge Song Hye-kyo, Tragic Romance Go Hyun-jung, Woman of Steel Lee Bo-young"
by HanCinema is licensed under a Creative Commons Attribution-Share Alike 3.0 Unported License.
Based on a work from this source