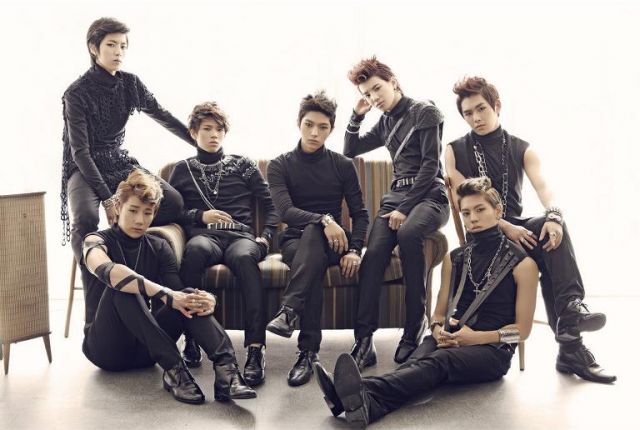 Lot and lot of new groups are being called "new Hallyu" or "the future of Hallyu", but only time will tell which ones can actually make it. I was hesitant to write about any of them, not too sure if I write about a craze that will not live long. But the group I am going to introduce today has few distinctive traits that set them apart from others. This may become their undoing, but at the same time this may be their strongest asset.

The group consists of 7 members: Kim Seonggyu, Jang Dongwu, Nam Wuhyeon, Lee Howon (Lee Ho-won), Lee Seongyeol, Kim Myeongsu (Kim Myung-soo), and Lee Seongjong. They are managed by Woollim Entertainment, the same label of Epic High and Nell. Yes, I guess, that would be the first trait that sets them apart. Neither of those groups is typical Kpop, although Epic High is highly (nomen-omen) popular.

It is not easy to write about popular group/singer that has devoted fandom. Usually new fans are very aggressive in terms of any mistakes and typos and exaggerate that to the size of Armageddon. Every word has to be carefully written and read few times out loud. They pinpoint with some perverted pleasure the slightest mistake, like: "Oh no, you wrote they held the stage at 4.53 pm, and it was actually 4.55 pm! Check your facts!" Personally, I do not think this is something that the world's fate depends on. Moving on.

INFINITE debuted on June 10th 2010 on M! Countdown music show with their song "Come Back Again" (다시돌아와) from the first single "First Invasion", earlier this month, on June 9th their showcased the song for the first time. The song was made into two MVs – usual one, and so-called "dance version". Some other groups also followed this trend of making two sets of videos, just to name DBSK and SHINee only.

From their second mini-album comes the song "Before The Down" that garnered a lot of attention in terms of the choreography, displayed fully in, again, dance version of the video. Perfect synchronization and difficult dance figures (namely "scorpion dance") highlighted their dancing abilities. And this summer they released their first full-length album "Over The Top", followed by repackaged album " Paradise " (in September). Group bid their farewell to Korean fans this week and prepare for Japanese debut. 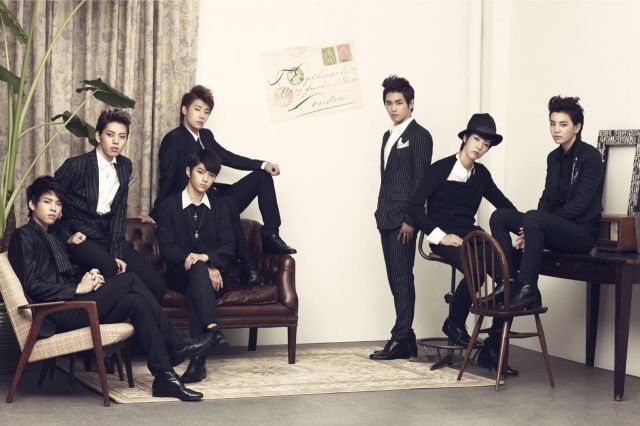 But INFINITE is not only ideal dancing group. They have voices and personalities as well. Their leader, Seonggyu has broad-range voice reaching high notes without apparent efforts (which is not exactly true, but this is not the time and place to delve more into high pitch singing), and it seems there is no song he would be unable to sing. Another main voice in the group is Wuhyeon, in comparison to the leader, having slightly less broad spectrum of his voice, because of his naturally low timbre. As the balance to those powerful (but still not fully developed) voices serve Myeongsu, Seongyeol and Seongjong. In the middle of it there are two rappers, Lee Ho-won and Dongwu, who also take part in singing, not only rapping (bless their efforts).

INFINITE's music is genuinely INFINITE. It is Kpop, but slightly peripheral Kpop. Comparing to huge beats and overwhelming musical arrangements of, let's say SM Entertainment artists (DBSK/HoMin, Super Junior etc.), INFINITE songs lack it. This is this first trait that sets them apart from other groups. After listening to their two, three songs, it's easy to say: yes, this is their style. I just want to say it beforehand – it is too early to say about INFINITE style, but during those 500 days since their debut, they embarked on their unique and distinctive path. And it looks like they will be following this route. What is this budding, as for now, INFINITE style? First, it is "back to the past". Their music leads the listeners to the past, to the great times of pop. "Come Back again" has upbeat, funky style that reminds of Michel Jackson glory days. It is impossible to stay still while listening to this song. Moreover, it has live instruments, mainly guitars. This is also something that great MJ tried – incorporating rock guitars into pop (2 guitars in "Beat It" is a masterpiece). The background beat and the flow of "Come Back Again" reminds older viewers of "Billie Jean" (young ones – go watch it ASAP!), it is like 21st century "Billie Jean" beat with some incredible choreography and singing in unison.

Then we got "Before The Dawn" probably the only song with such tremendous beat that captured the audience, but in the same time that made a scratch on the group style. Somehow fans started to use "BTD" as the comparing point to any other song, expecting that every next one will be equally powerful and "catchy". I hate the term "catchy". It implicates "catch" and "lose" as well. In this term, the "catchy" song is not catchy for a long time at all and it will eventually be lost and forgotten. I prefer " boring " songs but with emotions, good lyrics or some interesting element in musical composition than just a beat. But well, I guess it's just me.

Their first album, "Over The Top" does not have BTD-like songs. With the fastest one, "Be Mine" it focuses more on the lyrical side of the group (yes, I liked "Voice of My Heart" and "Can U Smile remix" from "Evolution") stressing once more this "back to the past". As I usually do not care about other people's opinions, I like this album a lot and this is why I decided to get myself repackaged version. Why? The reason is simple – after hearing "Be Mine" in remixed, orchestral version, I pledged my faith into this group. How many times we hear today a pop song changed into quasi-classical background song? " Paradise " is highly addictive song, with high pitched voices during the chorus that remind of good ol' times. "Julia" is, for me, a hypnotic song, built on rhyming sequences in refrains, using the back-up in an interesting way. Two solo songs by two main voices, that is "Because" (by Seonggyu) and " Time " (or "Stop The Time"/"Timeless" by Wuhyeon) prove that in the nearest future those two young men will be main topics among musical discussions.

Now, let's move to short characteristic of their MVs (really short, because it's better to watch by yourself than read an article by *ekhem*older*ekhem* fan of the boys).

Woolliment has geniuses in terms of creating MVs. Not only they fit the song, but they also tell some story. The fact that those stories are confusing enough also sets them apart from other bands. Typical MV presents the band. Good enough, but it is the form of art to present them in such a way so people will remember them for a long time. And I have to say every MV by this group is distinctive and fits the song, yet all of them have some invisible INFINITE watermark on it. "Come Back Again (Dance Version)" has three colors – black, dark blue and white. The camera is there as if by sheer chance, capturing "gliding" moves of the septet. "Before The Dawn" shows mainly two members – Wuhyeon and Myeongsu, as they are main characters in the story shown. There are many theories about the meaning of the MV, and I am not going to throw another one. One thing needs to be highlighted though – with the failed attempt to free themselves, two of the characters fell into the ever-repeating loop of night and day marked by the title dawn. One word comes to mind? Yes, "infinite" should.

"Be Mine" also depicts some story and " Paradise " as well. The fact that " Paradise " lyrics are not the happiest ones out there it's also something odd in Kpop world, where boy bands' lyrics focus on something else.

Since we are on lyrics already, Woolliment allows both Lee Ho-won and Dongwu to write their own parts in songs, and this is what sets them apart even further (I checked, and Dongwu is more active in writing those on " Paradise "). Usually agencies have people that write lyrics for the group, but here, all rapping parts are written personally by those two. However, they are not responsible for the whole lyrics yet. Maybe soon their participation in writing will be more visible?

Two of the members already had acting debut, Myeongsu appeared in Japanese Asahi TV drama "Jiu", and Lee Sung-yeol in "While You Were Sleeping" (SBS, 2011).

As casting the idols into dramas became a norm for Korean drama industry, we may be sure one of them will be soon featured as "drama cast".

One member, Wuhyeon is now taking part in "Immortal Song 2" competition as one of the singers.

They wrapped up Korea promotions and in November start their Japanese debut. 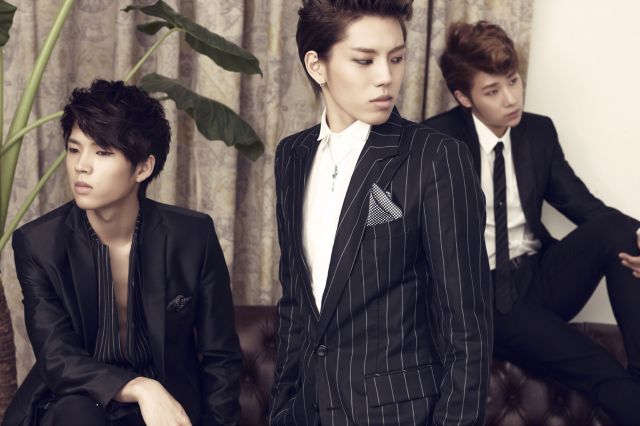 There is also one interesting thing. They have never said "We are second...(put a band name here)". They always say they're INFINITE. And this proves how smart this move is. When a band says something like "We will be second DBSK, second BoA, etc". it means they will always be second and they are comfortable with that. They will follow on someone else's path instead of their own. Big Dipper* guys know that already. To achieve the success and to remain in the memory of fans, you can't be just second DBSK, because you will be remembered only because of this reference. The real success is to be remembered as the genuine you.

They also have distinctive personalities, as seen from their show "Infinite Sesame Player" and during various interviews. They are not lollipops and candies. Lee Ho-won, ie. is as far from typical cute boy image as possible, he is not a glittering fairy (why all my reviews always come to this point? Why?). Dongwu and Seongyeol know that head is not only for a decoration, poor Seonggyu is caring as the parent (nagging included) and takes care of the group well. They are different, and they do not try to please the audience by faking it.

I do not want to guess how long they will last, but of one thing I am sure – they will set up new style of future Hallyu. With their distinctive singing, dancing, colorful personalities and music that is not typical, mainstream Kpop, they are already visible.

I hope I named all characteristics that make them stand against all other bands. And I, as the old DBSK fan, have some high expectations towards certain groups. For me cute face is not enough (although it does not hurt), but I Kim Myung-sooISTEN first, watch later. Distinctive voices, unique music and perfectly synchronized dancing make them infinitely different from others. And this is the future of Hallyu as I see it.

*Big Dipper – my own nickname for the group.

All videos are available for watching on Woolliment Youtube channel.

"INFINITE - New Hallyu Idols"
by HanCinema is licensed under a Creative Commons Attribution-Share Alike 3.0 Unported License.
Based on a work from this source