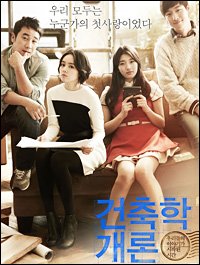 Twelve people suspected of being behind the recent leak of one of the year's top films have been apprehended, the police announced Thursday.

The Cyber Terror Response Center at the National Police Agency indicted a 36-year-old surnamed Yoon and 11 others for sharing and spreading the file of "Architecture 101" on the Internet, a violation of copyright law. Other than Yoon, only the identity of the initial uploader to the online piracy forum, a 34-year-old woman named Kim, was disclosed.

Although pirated films, music, computer games and software, among others, are rampant here and abroad, the role of a quasi-insider in the case highlighted the public's deeply-embedded disregard for intellectual property rights.

The romance feature by Lee Yong-joo-I, starring A-list stars Uhm Tae-woong and Han Ga-in, was released on March 22 to critical acclaim and stayed on top of the domestic box office for several weeks. It is one of the year's most successful films, sparking a renewed interest in the popular culture of 1990s Korea.

Yoon was provided a 1-gigabyte file of the movie two days before the official release date by its distributor Lotte Entertainment because he worked for a company that distributed features to military bases and overseas government agencies for promotional use only. Ignoring his contractual obligations, he shared the 1-gigabyte file with an online friend, urging him to delete it after viewing.

But it started a chain of events that incurred a loss of approximately 7.5 billion won (about $6.35 million), according to Myung Films, one of the country's leading film producers and the main company behind "Architecture 101".

The police estimate more than 300,000 downloads have occurred since. Any foreign servers harboring the file are beyond Korean jurisdiction.

The indictment of the 12 individuals comes about three weeks after Lotte's written complaint to the police on May 10, which launched an official investigation by the cybercrime specialists.

To date, "Architecture 101" has grossed 30 billion won, equivalent to around 4 million tickets on the domestic market, according to the Korean Film Council's latest figures.

"Insider leaked big-hit film ahead of release: police"
by HanCinema is licensed under a Creative Commons Attribution-Share Alike 3.0 Unported License.
Based on a work from this source