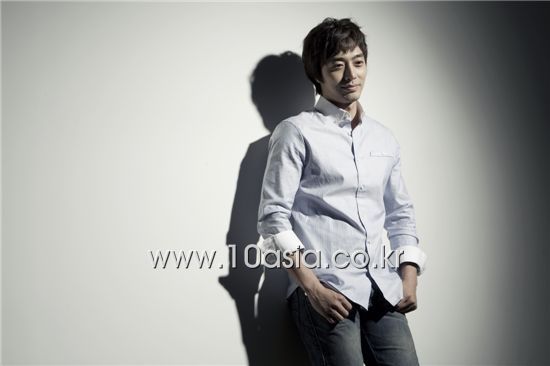 My name is Jang Seo-won. My real name is Kim Seul-gi. I started acting in the theater after I graduated college but my parents gave me this new name after realizing that my name doesn't suit my image as an actor. They saved my name in their cellphones under the name “Seo-won” but they just say "Hey" when they're calling me at home. I guess they're not used to it yet.

My blood type is B but a part of me is as timid as type A. Thankfully I've learned to become more laid-back after serving in the army.

For SBS drama "Secret Garden", I had originally auditioned for the role of Kim Joo-won's (Hyun Bin) secretary. My line at the audition was to say to Kim Joo-won “How come you show up at the office when it's time for everyone to leave?” I was worried because I didn't have that many lines but the staff informed me later that they changed my role to Jeong-hwan. I think playing the stunt man would be much more interesting.

Action role is totally different from last time. When I played the guard to Oh Ji-ho back in KBS drama “The Slave Hunters" (2010) most of my time was spent on practicing horseback riding. This time my action is closer to martial arts which makes me feel like learning everything all over again. There was this wire scene in the fourth episode of the “Secret Garden” in which I only got to practice for two hours and then shoot for an hour. I found my arm badly bruised after that. I almost got killed (laugh)

I am a big fan of actress Ha Ji-won.So when I did my first scene with her I was completely dazed. Most people say they get all surprised and excited when they finally act with big actors they admired from a distance but in my case I just went mum (laugh). There were some scenes where I exchanged a few lines with her but I haven't gotten the chance to get to know her better yet because she is so busy.

When I told my parents that I will be an actor they were not against it.
“Do whatever you like. Just remember, you'll be hungry.” “Okay,” “Fine, we'll feed you sometimes then.” And that was the end of the conversation.

I used to be an emcee for the department that promotes the Navy when serving my military duties. During the audition I acted the part Won Bin played in KBS drama “Autumn in mye Heart” The response I received at the time was... colder than I expected. (laugh) The judges may be soldiers but they had served as emcees for a long time so they probably had high expectations. I underestimated them.

My dream was to appear in a romantic film which I did in film "Come, Closer" (2010) opposite Young-soo (Oh Chang-seok). I didn't get to do romantic acting across an actress but it was still romance, so it worked. (laugh)

What I actually feared most when shooting “Come, Closer” was I had trouble shedding tears when I practiced in school. But during the shooting I was surprised by myself for really crying, completely absorbed in into scene.

When I was in 11th grade I appeared in SBS variety show “Good Friends.” I showed up in one of the segments “Catching up with Celebrities” and imitated people from various nations, starting with the voice of Hong Kong actor Stephen Chow to old grannies in the United States who can scream, punch, stick out a gun and shoot. (laugh)

Back when I was majoring drama at the Korea National University of Arts I got cast as a wrestler in some play. According to the script I was a Greco-Roman wrestler who falls in love for the first time and suffocates the girl in the process of hugging her. (laugh) The play was never completed but I've tried comical acting as well.

In the film “Cafe Seoul" (2009) I showed up as Gi-bong the punk. My hair style was no better than a rooster's comb or a doll with sprouted grass for a hair (laugh). To be honest I really hated doing that to my hair. It could have been better if I had made it shorter.

I am talented at sports, but I'm no good at sports that involve balls. I used to do lots of sports with balls in the past but after twisting by ankle during a basketball game, then getting it twisted it again during football match and then getting my chin hit by a ball on the first day of baseball practice, I realized I have had it. (laugh). These days I focus mostly on weight training.

I like drinking. When you drink with someone you can make your counterpart relax and get to learn more about that person. I used to drink a lot with actor Kim Dong-wook who is my junior in my old school. These days I try to spare my health (laugh) by drinking just one bottle and that seems good enough to get me tipsy. Recently I became close to actor Lee Phillip while shooting “Secret Garden.” I drink with him often while shooting with him outside Seoul. Lee is pretty much the same as the character he plays in the drama but is not that reserved.

As an actor my looks are too ordinary. Not too handsome but not as ugly as to say that I stink. When I look at the mirror I just think 'Not bad, it'll do'.

When someone comments on a blog related to me -- well, there is someone who writes all the time “Everyone, I'm Seo-won's cousin and I hope you like him, too.” His nickname is “Skeleton Warrior” and he actually isn't my real cousin but a son of my mom's friend who is in high school right now (Wow, what a supporter?) (laughs). Or maybe he's just trying to get friendly with a blogger?

These days I've become much more calm than before. More like I'm feeling the world of weight around me. Life is getting tiresome as time goes by and I also have to worry about my earnings. (laughter) All these issues weigh heavily on my body and soul. 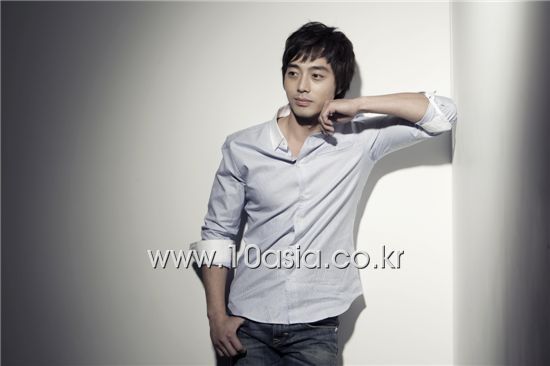 Actor Jung Seo-won poses during an interview with 10Asia. 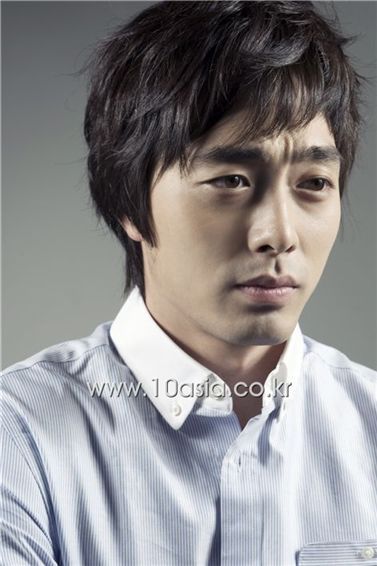 Actor Jung Seo-won poses during an interview with 10Asia.

"[INTERVIEW] Actor Jang Seo-won"
by HanCinema is licensed under a Creative Commons Attribution-Share Alike 3.0 Unported License.
Based on a work from this source