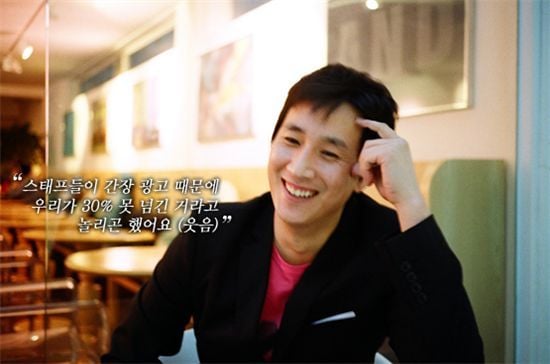 "The staff of our drama used to make fun of me and say we couldn't reach ratings of over 30 percent because of my soy sauce commercial". [Beck Una/10Asia]

Beck Una (Beck): I think you must have felt a satisfaction from playing your character Choi Hyun-wook who was always spitting out whatever comes to his mind.
Lee Sun-kyun: The characters I had played in the past were more defensive than offensive but I think Choi was offensive till the very end. Now that I think about it, reporters would always emphasize how 'romantic' I am but it has changed now to 'finicky'. (laugh) I also referenced Gordon Ramsey character from "Hell's Kitchen". I hadn't had much time to discuss my character with the producer because the casting for "Pasta" got set late and I went into shoot right after my appearance was set. One day though, the producer came up to me and showed me a Joker card from "Batman", telling me that he wants Choi Hyun-wook to give off a similarly slightly crazy vibe. That's when I told myself I would try and express myself in various ways and however I want. There was a lot of acting on impulse too.

Beck: Like what for example?
Lee Sun-kyun: The chopsticks? I would try catching the opponents throat with it, or try hitting..... I had just tried it out but it ended up helping a lot. The producer was always carrying around chopsticks from then on. (laugh)

Beck: It seems that after watching "Pasta", what viewers were thinking of the most was that they want to be in a romantic relationship. And of course, it would cause trouble (laugh) but some people were saying you and Kong might really end up going out.
Lee Sun-kyun: Gong Hyo-jin said at the wrap-up party that when she does dramas, she feels that she's in a relationship and that she's cheating on her boyfriend, so she hated it a lot when I would show her photographs of my son. (laugh) I myself was showing her sort of an intimacy by showing her those photos though. But I have definitely become more cautious about how I treat actresses now compared to before I was married.

Beck: The chef is someone who is in charge of the kitchen so I think you must have also felt the burden to take charge of the set too.
Lee Sun-kyun: Yes, it felt like I was constantly in a battle up against 10 people. Even more so when I'm in the kitchen because I'm the one talking 90 percent of the time. I also had a lot of lines so I had to act them out well but even when the camera is shooting the other actors, I would still be acting out my part. Of course it's the basic manner between actors but they could've been pressured to do the same for me too. But I got increasingly worn out because I was doing it up against 10 people. There wasn't a single cut where I could take a break. But I also really wanted to keep it that way till the end.

Beck: I think that's why in the last episode, when you gaze with a content smile at the people in the kitchen, I also saw a relieved Lee Sun-kyun's face overlap.
Lee Sun-kyun: Ah, I was reading that scene in the script when I started tearing. I don't know why. Maybe I was tired? I read it about four times and I think I cried every time. I couldn't cry on the actual day of the shoot though, even when I wanted to. We started shooting the last episode on the day it was going on air, starting at 2 a.m. I didn't want the show to fall through so I was just begging that nobody makes a blooper. (laugh)

Beck: You, whom we considered the heartthrob of millions of people, got married and became a father right away. That change in your personal life must have been quite an obstacle for your image as an actor who will star in a romantic drama.
Lee Sun-kyun: I think "Pasta" was a road I had not taken before. Naturally, I was very scared because it was a path I had not taken before. That's how much trial and error I ended up having to go through and how tough it was for me. But on the other hand, I became relieved that I think I pulled through somewhat and a bliss that I felt from having opened up another path for myself. I will never be able to forget having worked on this. And I'm very thankful to Kong Hyo-jin. 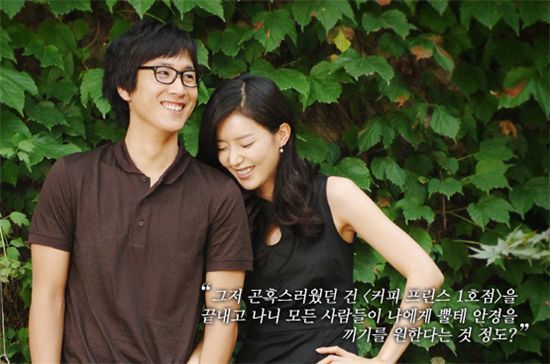 "I guess what was most painful after TV series 'Coffee Prince' was that everyone wanted me to wear horn-rimmed glasses". [MBC]

Beck: I'm curious what you would have been like when you were a young boy.
Lee Sun-kyun: I did track and field when I was in elementary school and I was so crazy about basketball in high school that I used to play for 12 hours a day and considered going to college with it. I was an extremely normal kid up till high school and there wasn't anything in particular that I wanted to do. The reason I took up liberal arts was because I really hated science. (laugh) I liked music so I wanted to be a producer for radio shows and I was interested in advertising too but I ended up not studying much so... (laugh)

Beck: What kind of music did you like?
Lee Sun-kyun: Since I was the youngest in my family, I listened more to music that my older siblings would listen to rather than for music for kids my age. Especially music by musicians at Dong-A Productions! I used to sing Kim Hyun-shik's songs when I was in fifth grade so nobody knew what I was singing. I don't know why but I liked that sort of sentimentality. When I was young, my parents used the first floor and me and my siblings the second floor, and we used to listen to Kim Hyun-shik, Ryu Jae-ha and the Shinchon Blues everyday on LP. I had a certain pride about listening to music that kids my age didn't know about. I also became friends very fast with kids who knew their music. And I enjoyed watching commercials so much that I wanted to do advertising too.

Beck: You spent quite some time unknown yet it doesn't seem you were the actor who is more greedy or ambitious than other actors in particular. So what is it that kept you going and not let go of acting?
Lee Sun-kyun: It may be because I had no ambition or aspirations. I was very simple-minded. But I was always thankful because there would always be someone looking for me. Even both then and now, what I want to be good at is acting and become a real actor. I have never dreamt of becoming a so-called 'top actor'. Of course, when I first made my TV appearance through a sitcom, I would worry whether I'd just become consumed but I learned a lot afterwards by appearing in short plays where I met some good people. So I think things have been okay for me. I'm not the type that sets a goal and charges toward it to achieve it.

Beck: I heard that it hadn't been your dream from the beginning to become an actor.
Lee Sun-kyun: Yes, before entering the School of Drama at Korea National University of Arts, I was part of the lighting team at the theater club of the college I had been at. But one of my seniors ran away so I took to the stage for the first time as his replacement. And that was, well, it's hard to explain but it was nice. It was my first time on stage but I wasn't nervous at all. I felt that I had done something actively that I felt good about for the first time. I guess there really is such a thing called fate.
Beck: Fate?
Lee Sun-kyun: After I saw my child come into the world, that I started theater because it was fate that it would happen. That it is why I met Jeon Hye-jin-II, didn't break up with her for seven years and ended up marrying her. I would have not thought of becoming an actor if my senior hadn't run away and if my friend, who left our theater troupe in just two months of joining hadn't introduced my wife to me... when I think of these presumptions, I think fate does exist to a certain extent. Although happiness depends on how you define it.

"[INTERVIEW] Actor Lee Sun-kyun - Part 1"
by HanCinema is licensed under a Creative Commons Attribution-Share Alike 3.0 Unported License.
Based on a work from this source