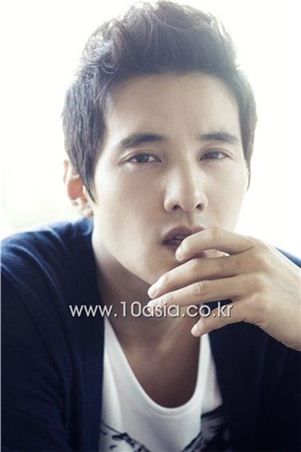 10: I heard that when you debuted, you had wanted to become an actor after watching Choi Min-soo starrer "Terrorist". "The Man From Nowhere" also revolves around the action sequences of one man. How did it feel?
Won Bin: For me, "Terrorist" was the greatest movie at the time. I dreamt of becoming an actor after watching that film. The time I spent working on "The Man From Nowhere" was a lot of fun for me. It was a new genre for me and I liked it even more because my character communicated with a child.

10: You must've been excited. (laugh)
Won Bin: It was fun. Many people worried that I might get hurts since there was so much action in it but I like moving around and sweating. I felt like I was playing a game doing the action scenes. I hadn't done this sort of action movie before so it was tough physically but it was new so it felt like I was learning something.

10: It seemed like the style of action in particular in "The Man From Nowhere" was important. Like the blade Tae-shik uses to cut his hair, it was brief, simple and sharp. And it seemed that he paid an extreme amount of attention to the fight scenes.
Won Bin: Director Lee Jeong-beom modified and combined three forms of Southeast Asian martial arts -- Silat, Kali and Arnis -- in a way to suit the movie. Cha Tae-shik used to be a special agent so he had to be swift enough to pin down his enemy instantaneously when he's attacked and we thought it was important that it be martial arts that can be put into practice.

10: What did director Lee say about your action moves?
Won Bin: Not once did he demand for something to be done a certain way. All he did was tell me about the emotional aspects to Tae-shik and he asked me to express Tae-shik's anger through the action sequences. He said he wanted me to express his outpour of emotions rather than try to show a cool action scene.

10: I think such emotions must stand out in the last action scene where he becomes extremely agitated. How did you try to show those emotions?
Won Bin: Tae-shik had no reason to live in that situation if he didn't have a child to save because he has already lost everything he had in this world. That is why I decided to portray him as a more cold-hearted and composed character. And if he's someone in such a state, I thought he would take down his opponent as quickly as possible by fighting cool-mindedly rather than out of anger.

10: You must've had to make your body suit that of a special agent to act one. When the camera got you full shot, I got the feeling that your body is very stiff.
Won Bin: I thought that Tae-shik must be able to move as swiftly as a cat because he's a special agent. And that his movements or walking should be stiff. I got into shape concentrating on making small and lean muscles rather than bulking up myself.

10: It really seemed like your body became perpendicular to your legs when you walk or run. (laugh) But Tae-shik is a special agent who has been through every hardship you can imagine and is very brutal to his enemies. Yet he risks his life for a child. What was your understanding on this?
Won Bin: I don't think he was doing it just to save that one child. I think he did it to free himself from his own pain from the past. He currently lives alone without family but I think he feels guilty to his family. That's why I regarded him as someone who is trying to break free from his past by saving the child.

10: Is that why he was at the pawnshop alone? It was funny to see how he sets up a pawnshop in nowaday Korea. (laugh)
Won Bin: A pawnshop is a lonely space that is cut off from reality and also feels like a prison because of the bars. The child says it too at a point in the movie but it's as if Tae-shik is in a prison. I think he might've locked himself in a prison from an extreme sense of guilt. 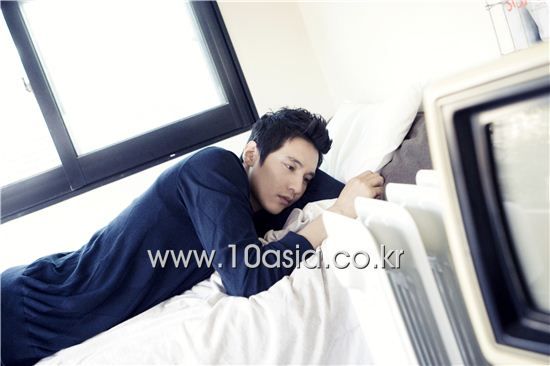 Actor Won Bin poses during an interview with 10Asia.

"[INTERVIEW] Actor Won Bin - Part 1"
by HanCinema is licensed under a Creative Commons Attribution-Share Alike 3.0 Unported License.
Based on a work from this source