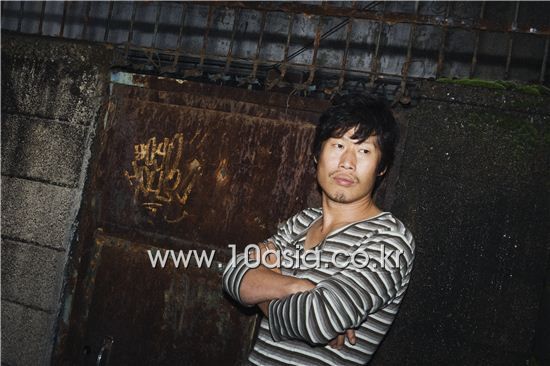 Yoo Hae-jin is an actor with a face that is hard to predict. With his comical yet strangely sharp facial features, he has played roles crossing between a police and gangster, a clown and butcher, and an idiot to villian, while managing to create completely different characters to the many 'bullies' he has been. But he is an actor who is hard to predict not only when he is acting. He is famous for being a perfectionist who will go to the region whose dialect he has to learn for his role and take dozens of ideas to the set of film "JEON WOO CHI : The Taoist Wizard" in which he was an animal. He is also a romantist who said his favorite movie is "In the Mood for Love" and will hum a tune by Nat King Cole in a low voice. But the Yoo who is best at comedic roles and is the so-called 'indispensable supporting actor' for being glib, is quite reticent in person.

The manager of this man, who feels uncomfortable at press conferences where all attention is turned to the cast and feels most comfortable when at home alone, asked the reporter to refrain from answering questions about the actress he is dating. But as we walked the streets of Insadong to shoot his photographs, a grandmother taking her grandson on a walk, gave her words of blessing to Yoo, saying "Get married soon!" and high school students shouted out "Kim Hye-soo is the best!" Yoo smiled with no signs of showing he felt uncomfortable. It was a face to Yoo we had not seen before.

10: You're known to be on the quiet side but you have mostly taken on characters which are funny or friendly. I think that's why, like just happened, people who run into you in real life presume you'll be similar to the person they see in movies and approach you with great familiarity. Doesn't that perplex you?
Yoo Hae-jin: I like it, I really do. (laugh) There's nothing as difficult as being ignored by the public while having a job like this. So I'm happy too when people treat me as a friend they haven't seen in a long time. I like it better than them just walking away after saying "Oh oh!" from far away because we're stars and it's not like they're aggressive either.

10: But you were fairly quiet at the screening for "Desire To Kill". (laugh)
Yoo Hae-jin: Situations like press conferences are actually a bit uncomfortable for me. It's where, for the first time, you show your movie to people other than those who made the movie, and we wrapped up filming for it last summer so we were showing it after a yea since it was made.

10: This movie, about two men with limited control of their own bodies who want to kill each other, is sort of like a European style comedy in terms of the situation or story development. It also felt like I was watching a two-act play of you and actor Chun Ho-jin. How did you come to choose such a unique scenario?
Yoo Hae-jin: To start with, the story was refreshing, and like you said, it felt like a two-act play or an absurdist play. After having started in theater, I've mostly been doing movies but it felt like I had returned to the stage while working on this production. It felt like it was the audience watching us when we were laying in hospital beds on set. That actually might be one of the first reasons I wanted to do this movie.

10: For actors, everything from one's head to toes, is their medium and weapon for expression, but in this movie, you're both basically tied to your beds. You must've worried a lot about the circumstantial restriction when there is such a huge and desperate energy that needs to be released from inside but can't be shown through movement.
Yoo Hae-jin: I was worried that my acting may end up looking too flat in trying to expressing that sort of pschological state while having a physical disability. The movie was already being shot in a limited space with few characters. I talked extensively with the two directors and Chun Ho-jin on set. For the scene in the end where the two fight their decisive fight, I think we even discussed on how these two characters, who can't even move their bodies, will encounter each other on the floor below their beds and what tools they'll use.

10: It seemed like you were really pushing it to the extreme in the fighting scene at the climax of the movie -- it was to the extent that I was starting to feel disgusted.
Yoo Hae-jin: Yes, and we weren't working in a very easy environment because we were on a schedule too tight for a feature and were a bit short on the budget. We had to wrap up filming in two months maximum so I think I spent a very hard-working summer last year. 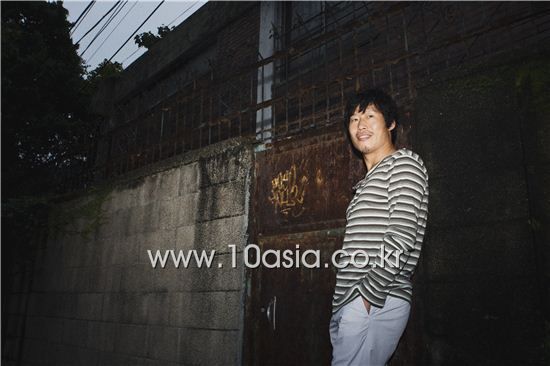 10: You have four movies this year including "Moss" which is already out and three including "Desire To Kill" which will premiere later this year. Did you have to go back and forth between any two?
Yoo Hae-jin: I hadn't. You can't do anything else while doing work like this. It's impossible to do two together.

10: Do you feel any pressure about how well "Desire To Kill" will do since you've taken on a lead role for the first time in a while?
Yoo Hae-jin: Many people ask me how different I feel when I'm playing a supporting character versus the main character when there actually aren't any differences. But I do think the pressure over the movie doing well is the one difference that there is. It feels like there is more responsibility I need to take on.

10: But I think this movie is one that could leave the actor experiencing sort of an extreme. Did you ever regret deciding to take on the movie just because it had a scenario you wanted to challenge yourself with and end up thinking 'Why did I bring such suffering upon myself?"
Yoo Hae-jin: When I'm trying to decide on whether to take on a role that seems like an adventure or will be very tough, I ask myself one question. "Someone else will do it if I don't, right? Then what's there about it not to do? Okay, let's do it". That's how get started. (laugh)

10: I heard you really wanted to star in "Moss" because you had enjoyed the original comic a lot. What about the comic did you like so much?
Yoo Hae-jin: I started reading it by chance one day and ended up reading the entire published series on the spot. It had a power which makes you really concentrate. I thought, 'Wow, this seems to be a very interesting story'. And I wanted to know how the story intended on ending. The character's lines were alive as well, as if I could almost hear them talk.

10: You have taken on many roles which do not carry much weight but leave strong impressions. As an actor, you must also feel burdened by the fact that you're remembered for such strong characters.
Yoo Hae-jin: There are cases where after I've played a strong character, people will want to cast me because they want that sort of vibe from me. It's not great as an actor but it's not as if I can tell myself, 'I won't do anything until I'm handed a different character' so in that case, I'll work within the character and try to give slight changes to it.