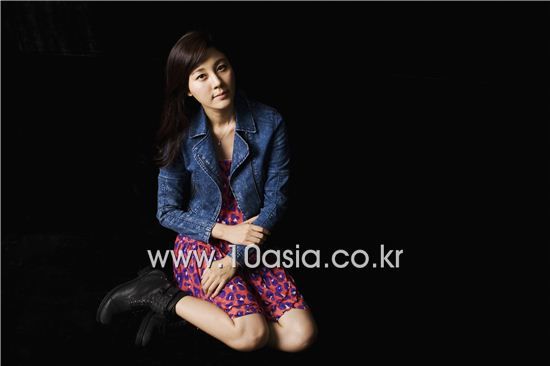 10: Is it the first time you've immersed yourself in the character this much?
Kim Ha-neul: Extremely speaking, I could say it's the first time.

10: Then did you try to stay your character even when the camera wasn't rolling?
Kim Ha-neul: I definitely wanted to stay immersed rather than come out of it but the breaks in between were longer than I had expected them to be. I repeated the cycle of shooting for a few days then resting for a few so it was hard for me, whereas the guys kept shooting without any breaks. And even when I did feel like I needed to rest, I couldn't let go of Soo-yeon completely because then I would have a hard time trying to become her again when I go back into shoot. Even the male actors had a hard time going back to being their characters when they finally got the time to take about three days of break.

10: It looks like you went through a new experience in various aspects. Do you think there's a possibility that you will develop by a level from this?
Kim Ha-neul: Rather than there being a possibility of it, I think there'll be more than one level of development. After every role that I play, after living someone else's life, I have always matured in some way. I'm different pre- and post-production. I don't know whether it shows right away or not but in the end, I know I have matured at least a bit. And that should be the way it is. After a movie like "Lovers of 6 Years", I thought a lot about love and through another movie, I learned something from the crew or actor. And those experiences I accumulated on made something emerge very smoothly but with this role, it feels like there's something different, something that's mine. I don't know if I'll be able to show it through my next role and whether the audience will feel it, but I do.

10: Can you tell me in more detail about how you think you developed?
Kim Ha-neul: For example, for "My Girlfriend is an Agent", I learned horseback riding and to do action to create my character Soo-ji. These sort of outer developments are possible through learning but I can't teach myself to become Soo-yeon. I have to create her through the process of bringing her out from within myself. Through sentimentality and imagination. That's why I'm looking forward to seeing how I've changed after playing the role of Soo-yeon, I think I have probably become very different.

10: But if you develop bit by bit after each role, how do you think it would've been playing the role Soo-yeon a bit later?
Kim Ha-neul: I think that would've been good too. It's not bad but... Would the role still have been handed to me? (laugh) But I don't think any actor is ever 100 percent satisfied with his or her acting. So even if I played the role of Soo-yeon after I'm more refined, I still don't think I would've been satisfied. Rather than that, I think there is significance in meeting that friend in the process of refining my acting and taking on the role as sort of a challenge.

10: The reason I talked about age is because you could be paving a new road for yourself, after being a teen star, by meeting a character who has inner strength.
Kim Ha-neul: It does feel like I want to play a larger variety of character and that my perspective is becoming wider. There definitely are roles that actors my age can play in trendy dramas but there are so many of them. Simply put, I've done many of them so far. Main characters of soft dramas are attractive and I'm not saying I won't do them anymore but there are so many new things I want to try. Rather than preparing myself for a role that fits my age, I think it's good to broaden my perspective.

10: As an actress, do you by any chance want to try breaking into sort of a new field of acting?
Kim Ha-neul: No. Isn't it better to say, 'I tried so and so like this and this happened', rather than drawing up something new?

10: Do you not like setting plans?
Kim Ha-neul: I never set plans. And I think I've always been like this. I've just done the best with whatever is in front of me and then realized one day that the result is better than what I'd imagined it to be. It's important to have a goal and big dreams but if you draw up a picture of what you'll be like when you're most successful, I think that will rather keep you trapped inside a mold and keep you from moving. I think I'd be able to fly higher if I don't keep such things in mind.

10: Have you always been like that?
Kim Ha-neul: That's what I've done and I will continue to.

10: How did you come to that judgement?
Kim Ha-neul: I tried it and it worked the best. It's my inclination and it's who I am. I had moved forward without a definite direction or line and just held onto something very blurry but it feels like it has become clear.

10: But don't you have a standard for your choices each time you choose a role?
Kim Ha-neul: I choose my next role depending on the influence I receive from my previous role. I don't decide to do a melodrama just because I've done a romantic comedy. There's a different form of influence I receive each time. For example, the me before and after playing the role of Seung-ah from "On Air" were very different. The Kim before Seung-ah was not confident, low spirited and had a lot of fear. But afterwards, I reflected on her in reality, thinking this is what I can do in such a situation. That's how I gained a lot of confidence and I myself felt the change. And I wanted to release that energy so I went for action. That's how I decided to do "My Girlfriend is an Agent".

10: So you're saying your choices depend on the situation you're in. Then what are you thinking of doing after Soo-yeon?
Kim Ha-neul: I don't want to play a role that is active. I really want to do acting where I can utilize what I have accumulated within myself.

10: You said you changed a lot by playing the role of Seung-ah. Then through the process of accumulating on experience as an actor, do you think you yourself are becoming a better person?
Kim Ha-neul: I think I'm getting to know myself better through acting rather than becoming a better person. It's hard to describe what that is to someone else, but for me, at least. 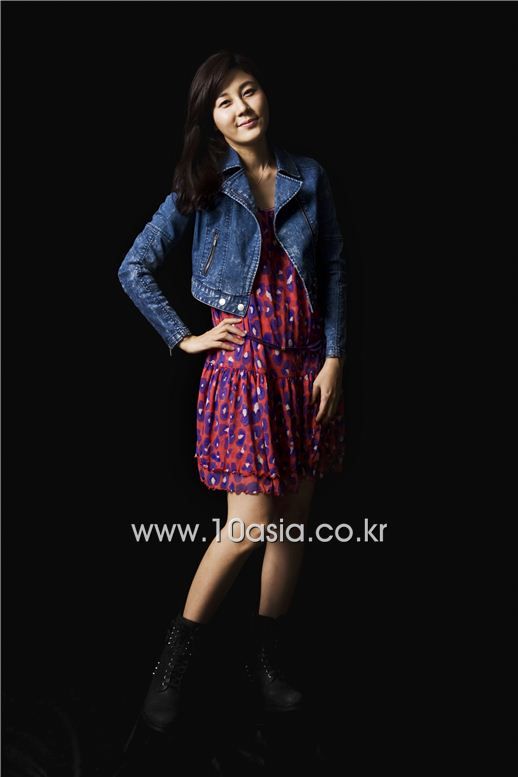 "[INTERVIEW] Actress Kim Ha-neul - Part 2"
by HanCinema is licensed under a Creative Commons Attribution-Share Alike 3.0 Unported License.
Based on a work from this source