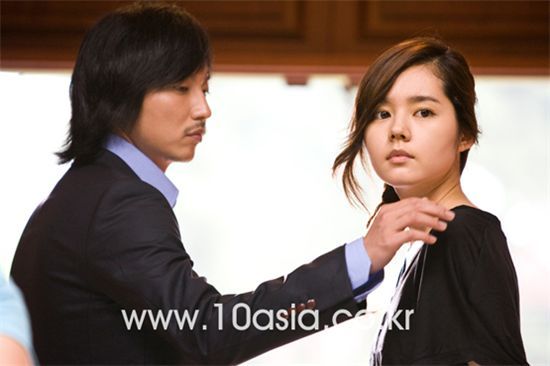 The young, smart woman has no money while a rich, beautiful woman does not know love. Female characters Jae-in (played by Han Ga-in) and Tae-ra (played by Oh Yun-soo) in SBS TV series "Bad Man" each have a desire that they cannot fulfill. Bad man Gun-wook (played by Kim Nam-gil), whom Jae-in approached when she mistook him for a conglomerate heir and whom Tae-ra wants to steal away from younger sister Monet (played by Jung So-min), twists their lives into an unexpected direction. What sort of a female character do actresses Han Ga-in, whose image transformed from pure and innocent girl to a materialistic woman who dreams of climbing the social ladder, and Oh Yun-soo, who plays the elegant married woman swayed by temptation so perfectly, want to show viewers? We met with the two actresses on the open-set shoot of "Bad Man" in Yong-in, Gyeonggi Province on June 14.

Q: In fourth and fifth episodes of "Bad Man", which aired last week, you had long lines in Japanese during your Japan location shoot. How did you prepare for that? Did actor Kim Jae-wook, who is fluent in Japanese, help you with it? 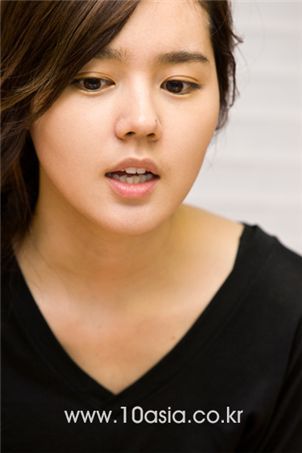 Han: I wasn't very close to Jae-wook at the time so I didn't get any help. (laugh) I went to Japan with a Japanese teacher who was hired by the production company. I listened to a [Japanese] recording of my lines every morning and night before I went to sleep. I listened to it so much for three weeks that I could automatically start saying my lines if someone poked me. I don't think I will forget them for the next five years.

Q: The male characters Shim Gun-wook and Hong Tae-sung, the two men standing by [Han's character] Jae-in, are very different. Who would you choose to be with in real life?
Han: I am not saying this because I play the role of Jae-in but I think that is something one would have to mull over a lot. I think she is attracted to Gun-wook because they have a lot in common and they say things like, "You are me, just a separate person" or "Do you think you are so different from me?" On the other hand, I think Tae-sung is a little adorable, perhaps because he is the son of a rich family. But more than that, I think something about him stimulates her maternal instinct and makes her want to take care of him like a mother would. But if I choose one over the other, somebody is going to get very upset so I am not going to answer that. (laugh)

Q: Does your husband [actor] Yeon Jung-hoon mind that you are working with two handsome actors?
Han: I think he does, at least a little. They are both younger than he is and great looking too. Even my friends often say things like, 'I want to come over to the set, can I come play? Get me an autograph' and they had never said such things during my previous dramas. (laugh) So I think my husband does mind a little bit but he doesn't let it show particularly.

Q: Surprisingly, Jae-in is a character who sometimes appears easygoing and wild. The scene where she cleaned Gun-wook's house and did his laundry and imagined herself getting angry was funny.
Han: Shooting the imaginary scene was a little hard on me. Because it is closer to the real me in real life. (laugh) And up till now, my Japanese-speaking tone was a bit high when I was talking to Lady Shin (played by Kim Hye-ok) or Tae-sung. But I think my voice will gradually go lower as the show progresses. My original voice is actually so low that I worry whether I should really use it on television. But the director told me that he wants to use my usual way of speech so I think there will be some changes after the seventh or eighth episode. In the beginning, Jae-in is just vaguely thinking that she wants to marry into a conglomerate family but after she goes through some incidents, she makes up her mind to go further in that direction.

Q: What kind of changes will we be seeing in Jae-in in the future?
Han: Through some upcoming incidents, I think the way Jae-in heads toward achieving her desire will be depicted in more details rather than its current vague description. I don't know how the viewers will see it but I hope it is not the lovely, pretty female lead characters that I have previously shown. I want the story to be a bit more clear, however it may end. Either she charge forward toward her desires or fall in love and go through conflicts during the process. Jae-in is a character who is going through an inner battle because she has her desires and the emotion of love keeps creeping up on her. So I would like the producers to express her as someone who gets hurt more and lives more intensely. When I tell the director, "Sir, I would like this to be more intense", he would say (Han impersonates director Lee Hyung-min's voice) "Ga-in, you don't like pretty, lovable characters? The viewers could hate you". But I want my character to have a clear, definite motivation as to why she has to go her way, even if means viewers might hate me a little. Even the director told me that Jae-in is a character who changes and grows up in the story and that she will have more force in the latter part of the drama. I too worried a lot about how I can express such aspects and I think I will be able to grow up a lot more. So I want to show people a different image and personally hope that Jae-in will be a more memorable character.

Q: You are playing another version of a married woman who falls in love with a younger man, after playing one in MBC TV series "Bitter Sweet Life". Are you particularly attracted to such roles? 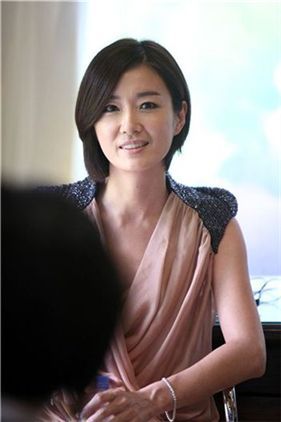 Oh Yun-soo (Oh): It is not that I am attracted to that kind of roles but I have reached the age where I can pull off such characters, and so I am getting offers to play them.

Q: In the first episode, the scene where Gun-wook was taking a hair off Tae-ra's chest area caused a stir. But it felt a bit awkward too.
Oh: We thought so when we were shooting the scene. (laugh) If a stranger tries to take something off the way he did, normally people would either shake it off or run off and we said, 'Why is Tae-ra standing still?' But we kept it the way it is for the next development in the story.

Q: The trailer for next week's episode showed a kissing scene between Tae-ra and Gun-wook.
Oh: In the script, it only led up to the moment they were about to kiss. But right before the shooting, the director said that there should be a kiss around this point in the story so we suddenly had to kiss. There weren't any big bloopers but we shot it several times to get it from different angles. Kim Nam-gil is a younger actor but he is so talented. I learn a lot from him and there shouldn't be any problems in the future if we keep working well together. Melodramatic elements are often seen in a drama so I don't think it is too racy, but I don't know how the viewers would feel.

Q: I think you are one of the people that younger actresses look up to because you have worked in various genres and played a variety of characters. But getting older must be quite a burden for an actress.
Oh: You can't do anything about time passing. You can't stop time and it is not so great to take medical procedures to fight the aging process. These days, images are shown in HD [high definition] and particularly, I get very nervous when I have to appear in a scene with young actresses like Monet. Because the difference in the skin tone and face is very clear. (laugh) Photographs and screens cannot lie. When you do a commercial, they do post-production stuff but there is no such thing in a drama. But when you start caring about things like that, you get frustrated and stressed so I am trying to feel satisfied about how I look at my own age and getting through it by staying positive.

Q: But your appearance barely feels like it ages. People envied you when you appeared on a TV show and said that your stress level is zero. Is that your personality?
Oh: You can't have zero worries in life so I tend to worry for a short time and forget about it. I wasn't like that way from the start but I started thinking, 'What can you do but forget? Worrying is not going to solve anything'. Then my mind gradually changed positive and now I worry for just a little bit and not worry at all. I am surprised myself. In a way, it may look like I live my life thoughtlessly. (laugh) I think my personality has changed to one that can shake things off quickly.

Q: You are communicating with fans through Twitter. How did you come to start using Twitter?
Oh: A lot of people around me use Twitter so I first started for fun. I am not the kind of actress who goes on a lot of variety show, so I didn't have much interaction or communication with fans. But when I was shooting MBC's "Bitter Sweet Life", I communicated a lot through my mini-hompy [on social networking site Cyworld] and this time I am talking to fans who like "Bad Man" through Twitter. It is fun because Twitter is faster than mini-hompy.

"[INTERVIEW] "Bad Man" actresses Han Ga-in and Oh Yun-soo"
by HanCinema is licensed under a Creative Commons Attribution-Share Alike 3.0 Unported License.
Based on a work from this source