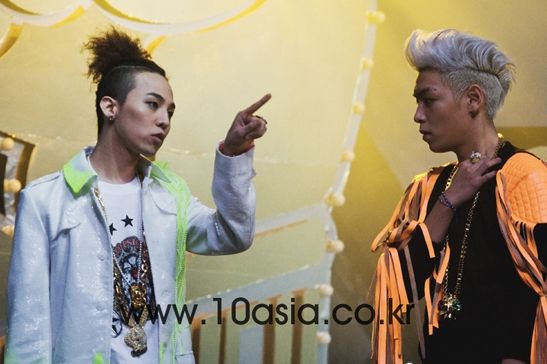 Not everybody can express their thoughts through music. And not everybody can organize and speak of the result of the thoughts they have gained from making music. But G-Dragon and T.O.P (Choi Seung-hyun) are musicians who can do both. They spoke only of their music throughout our interview with them and talked about the thoughts they injected into their music. Whether you agree with their music or not, we recommend you read this interview to hear what the two have to say about their music. This is what it means for these two young men in their early 20s, regarded as idols stars, to make their own music and present it to people.

10: How does it feel having to work together during Christmas time? (laugh)
T.O.P (Choi Seung-hyun): We feel sorry for each other. (laugh)

10: I feel bad that I'm interviewing you as well. (laugh) It's been a week since you resumed your activities. How has the reaction been so far?
G-Dragon: We have to accept that we've been on a long break. (laugh) In the past, we really felt the heated response we'd get at once but it doesn't feel quite the same now that it's been two years since we've been Big Bang. I think that from now on, we'll receive attention from people depending on how we do. If necessary, I might appear in some variety shows to attract attention so that people will watch us perform.
T.O.P (Choi Seung-hyun): I'm not quite sure yet. The album was released just yesterday and it's great to hear that a lot of copies have been sold so far. But I think it'll take some time before I will really start feeling it.

10: How does it feel to perform on stage for the first time in a while? It's the first time just the two of you are performing together.
G-Dragon: I was nervous on our first televised stage performance but the burden has been lessening since then and I've been enjoying myself more. And when we pre-record performances, it'll leave us exhausted because we'll shoot three or four times over but it seems the best cuts always come out during go. On the first take we'll be overly conscious of the fact that we'll be on television so only do planned movements which isn't fun but then at the end, when we've almost given up and just move as we please, the best cuts seem to come out. So we'll usually try to take to the stage with a heightened mood in order to maintain that condition.

10: So you're "HIGH HIGH" just like the title of your song. (laugh)
T.O.P (Choi Seung-hyun): Yes. We talked with our dance team a lot as well because we wanted to appeal with something more comfortable and free rather than putting on a uniform group dance.
G-Dragon: Idol groups are basically defined as doing pre-arranged dances and wearing matching clothes. But we decided that we will try to put on more natural performances and make people think that idol singers too can show their apply in such natural ways. It's more fun showing something different every time than repeating the same thing over and over again.

10: But Big Bang has danced pre-arranged moves before. Although you two seem to be set on capturing the audience by showing them that you know how to have fun on the stage.
G-Dragon: The biggest strength that Big Bang has is that although we are a single team, we each have our individual styles. And we're a single team but we can create a new form of synergy depending on how we re-group ourselves. That's what we wanted to show people and rather than focusing on where the camera is, we want to communicate with our audience during that moment so we decided we have to lift the mood as much as we can. I believe it's our duty as singers to make our fans enjoy our performance from beginning to end and leave them exhausted when they're leaving after watching us. So we want put on performances that'll even make viewers at home jump up and down. 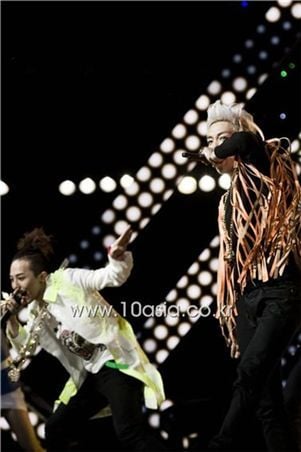 10: I think you were like that particularly for your first performance [as a duo unit] at cable music channel Mnet's Asian Music Awards (MAMA). There really wasn't anything that was set up on stage and you two performed as if you were just skimming the stage.
G-Dragon: We really didn't have a single stage effect, that's for sure (laugh). No equipment and fireworks weren't allowed.
T.O.P (Choi Seung-hyun) : But we're Big Bang and we've been performing for five years now which means we're bound to have learned something during that time so we half jokingly said, "Hey, let's make it through with our accumulated expertise". (laugh)

10: And it worked with your expertise? (laugh)
G-Dragon: We were in Macau so we wanted to leave a strong impression on even the people who don't know us. We also wanted to challenge the mindset that the stage can only feel complete when singers move around on it a lot -- we wanted to show people the weight and presence that can be felt by a single person standing on stage. So with nothing prepared, we said, "Let's kill it". (laugh) I'm sure crowd felt it. We had also had our company's CEO, Yang Hyun-suk, pressuring us through text messages...

10: Pressuring you? (laugh)
G-Dragon: He wrote, "You guys will be scolded if you mess up on stage". We had no choice but to do well that day. (laugh)

10: Yang definitely seems to push you hard. (laugh) But not everyone will have such thoughts just because they're pressured to.
G-Dragon: I think it has to do with a sense of owning the stage. On music programs alone, there will be as many as 30 groups waiting for their turn to sing, which means each team has three minutes or so to prove themselves. When you're on stage, you have to own it because once the performance is over, it's no longer yours. An owner is free to act whatever way he wants to at home, no matter how many people have gathered there because you're the owner and I think you also get to accept people's response from an owner's point of view. I think that is why I can perform on stage with confidence.

10: I can see that that sense of ownership has been reflected into your new album because there seems to be a story to the first six tracks. You introduce yourselves in the "INTRO", with "HIGH HIGH" and "OH YEAH" have fun on stage, and then you come down from it begging a woman "Don't Leave". (laugh)
G-Dragon: Us, as well as YG, and Big Bang in particular consider the flow to an album very important. If an album is one complete work, we believe there has to be some sort of a natural flow to it to a certain extent. So we start big, gradually somber, cut it off with "KNOCK OUT" and then show our individual styles. We always pay a lot of attention to these things.
T.O.P (Choi Seung-hyun): It's actually been a while since we made our solo songs. It was decided later on that we'd include our solo songs in our project album. My songs are from when I was working on film "71 Into The Fire (2010)" and KBS drama "IRIS (2009)".

10: And that's even more so why unlike your solo songs, you had to maintain a consistent vibe to the songs you two worked on together. How did you discuss on the direction you would take your album?
T.O.P (Choi Seung-hyun): I think it just came to us instinctively. Instead of saying, "Let's take it like this, this time", we just went to the studio and stayed up several nights writing up lyrics and recording songs. In the past, we'd get together after G-Dragon records the parts he has made and I've recorded the parts I've made, and then make the necessary changes and additions, but this time, we gave advice to each other on what could be improved and a lot of the musicians we work with helped us out as well. I think this may be a product of YG's instincts. (laugh)
G-Dragon: That's actually what our unit is about. Before making this album, I was working on Big Bang's album and since it'll be the first we're releasing in a long time, I wanted to try a lot of things so I experimented with a variety of units including me and T.O.P (Choi Seung-hyun), Taeyang, Seungri and Daesung, Daesung and me, and Seungri and Taeyang.

"[INTERVIEW] Big Bang's G-Dragon and T.O.P unit - Part 1"
by HanCinema is licensed under a Creative Commons Attribution-Share Alike 3.0 Unported License.
Based on a work from this source