[Interview] Do Kyung-soo, an honest actor 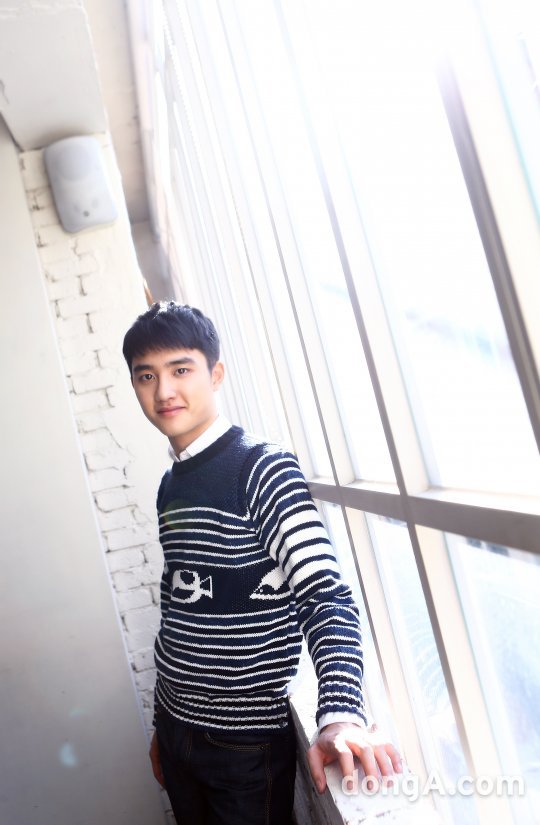 These are the records set by the group EXO. They top charts with every album they release and everything they do or say becomes an issue.

Do Kyung-soo (D.O.) from EXO had his first interview as an actor in the movie "Pure Love - Movie". We expected him to be passive a he is an idol turned actor with an image appointed to him by the public as an idol.

However, he broke this stereotype as he was very honest and outspoken. He was very much like Beom-sil from "Pure Love - Movie".

Q. How does it feel being interviewed on your own without the others from EXO?

Do Kyung-soo: I don't speak much and I get nervous during interviews and I am nervous now. My agency didn't say anything about having to be careful of what I say but they did tell me not to be 'too honest'. This should be a good experience for me.

Q. How happy are you with "Pure Love - Movie", your first movie in a lead role?

I watched the movie for the first time at the premiere and thought I could have done better with the dialect and emotional parts. Those who don't know the dialect well say 'it's alright' but those from the Jeolla district might think otherwise. It was so awkward.

I think the acting could have been better. I thought I put out 100% of myself in the character but I guess it wasn't enough. I just hope the audience feel the same way I do.

Q. Are Do Kyung-soo and Beom-sil alike in any way?

There's one thing we share in common and that is doing anything for Soo-ok (Kim So-hyun). I know my rights from wrongs and I was very much like Beom-sil when I was seventeen but I started to like accurate things the more I spent time in society where I meet a lot of people and that's changed me.

I don't shy away from things or keep from saying things about myself. I think I can speak out to whoever I like at the moment.

Q. While a lot of fans are watching you, do you think you can really deliver your feelings to 'the one'?

If there was 'someone', then I would.

I might not be able to everything I want as I am a public figure. We won't be able to walk the streets let alone go on vacation together. That's disappointing but as a public figure I am doing something no ordinary person can do and that's comforting.

Q. You are the oldest amongst the five friends but you are the youngest when it comes to experience as an actor.

I took them out for dinner and stuff but I never thought about having to act like a 'big brother' just because I was.

The others were very nice to me and I learned a lot. I learned how to be a 'big brother' in "Pure Love - Movie".

Q. Your next movie "My Annoying Brother" is being promoted naturally because of this.

Is it? I never thought about that (laughs).

Q. We wonder what it was like at Goheung.

"Everything was interesting from the beginning. It was very family-like. Everyone had a hard time because the weather was so hot you would sweat just by standing outside. The staff kept me out of the shade and were very considerate.

When making the movie was cancelled due to rain or something we would spend time swimming or fishing. I used a room with Gae-deok (Lee David) and Sam-dol (Yeon Jun-suk). We even showered together but Sam-dol was shy so I teased him a couple of times.

Q. Do you a good drinker?

I don't know my limit yet. I stop drinking after a while. I don't like Soju because of the smell, but I like beer. The 'brothers' (Lee Kwang-soo and Jo In-sung) drink bombs and we talk about everyday things and acting.

Q. There was a water scene. Are you a good swimmer since you swam in the ocean in the movie?

I learned how to scuba dive for the water scene. It was fun. I'm not a great swimmer but I'm not afraid of the water. If I was afraid then I wouldn't have been able to bring out my emotions in the scene. I also have good lungs which allowed me to go through the scene without difficulty. 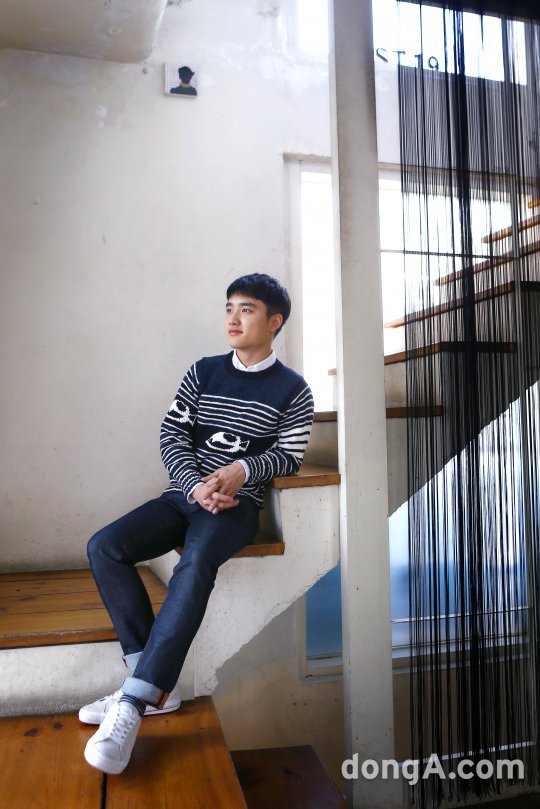 Q. Do you regret anything about the romance you had with Kim So-hyun, your first love?

I do think I could've expressed better. In the umbrella scene, Beom-sil tells Soo-ok 'I'm going to carry you on my back.' I wish I could've added more feeling to that part.

Still, I think it was enough. It's a friendship story and the movie doesn't focus too much on Beom-sil and Soo-ok.

Q. We heard you had your first love when you were 19?

It was when I dreamt of being a singer before I joined the company. That was my "Pure Love - Movie" moment. However, there are more depressing feelings than good ones from my first love. It helped me with the movie though.

I don't really know. I am twenty-four now so I think the first thing I think of was my 'first love' but that could change as I get older.

Q. You seem to really know what you're doing. Have you been trained to act?

I was taught how to act a couple times. I thought I was very unnatural as if I was squeezing out something. So I decided a lesson or two would help. I learned how to understand the situation and looking the person in the eye as I speak. I learned a lot on set too.

Q. Other EXO members are also acting, do you share advice?

We don't talk about acting amongst ourselves. Everyone is new to this and I don't feel it's my position to 'advise' them. We just hope the best for each other.

Q. How does your opinion reflect when it comes to choosing work?

I look at the options with my agency and talk about the character on whether I can do it or not. I get along with the team director.

Q. Unlike the fancy character you are on stage, you have acted out characters with inner pain.

I don't think I should be the way I am appointed to be just because I am an idol. I want to do whatever is good for me. I don't think I am suited for a young but mature character at the moment.

Q. Is there a specific genre you would like to try?

I want to be a bad guy, a bad one. Mellow was fun but I would like to try romantic comedies and artistic ones too.

Q. What kind of an actor do you want to be?

I want to be a cool one like George Clooney, Jack Black and Jo In-sung.

'Cool' has to be the right word and I am looking for something that only I have. An actor who doesn't 'change' is also 'cool'. I want to grow old doing whatever I can at that age.

Q. You seem content with the life you have now.

100%. I am experiencing what I can do only at this age. I am happy with my life now and it's fun.

"[Interview] Do Kyung-soo, an honest actor "
by HanCinema is licensed under a Creative Commons Attribution-Share Alike 3.0 Unported License.
Based on a work from this source