[Interview] "Familyhood" Ma Dong-seok, "I'm lazy in everything but work" 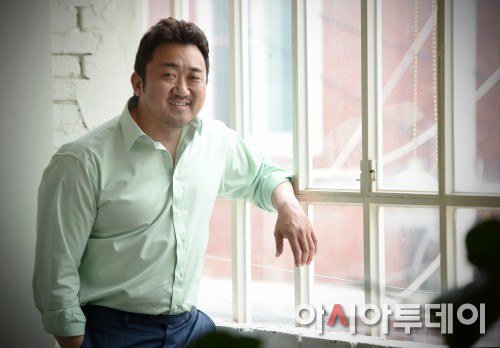 Ma Dong-seok was interviewed on the 13th in a café in Seoul and he said, "I'm diligent when it comes to work, but otherwise I'm lazy".

Ma Dong-seok takes on the role of top star Joo-yeon's (Kim Hye-soo) childhood friend and manager Pyeong-goo. He is also a stylist and he goes through 24 outfits for the movie.

Ma Dong-seok said, "I am not usually interested in clothes, but they told me I was a stylist so I did some research. I thought hard about what my style is and even tried on glasses. I asked the director for advice".

"I even tried putting on make-up to look less strong. I only put on make-up when I needed to disguise myself".

He was asked which style he liked the most in the movie and he said, "Nothing. Everything was uncomfortable. I wore hiking pants today. I don't like taking time to put on clothes and I don't like clothes with many buttons".

"I am very hard working but lazy about other things than that. I don't even go shopping for clothes".

"I am lazy when it comes to love. It's just not my style. I like working for now and my brother got married first so my parents just tell me to work when I can. I want to work for as long as possible so I like it".

Meanwhile, "Familyhood" is a comedy movie about a top star announcing her pregnancy to the world. The movie comes out on June 29th.

"[Interview] "Familyhood" Ma Dong-seok, "I'm lazy in everything but work""
by HanCinema is licensed under a Creative Commons Attribution-Share Alike 3.0 Unported License.
Based on a work from this source