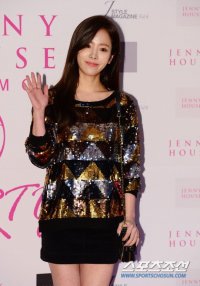 MBC historical drama "Yi San", which has been a top drama for nine months, has two episodes left from its total 77 episodes. Han Ji-min, who played Seong Song-yeon, the woman that the king loved, matured as an actress through this drama.

Song-yeon, who became a royal concubine, left the world on the 2nd by a disease, and made Yi San and all the viewers sad. The viewers' board overflowed with messages like "Please revive Song-yeon" and "If Song-yeon dies, what pleasure is there in watching?" It's because they were empathizing with the character of Song-yeon.

During the press conference, Director Lee Byeong-hoon said that Han Ji-min was "a bright actress with a clean appearance". Her small body frame incites men to protect her, her soft and pretty face, and the tears that flow from her sad eyes are still in viewers' memories. We had a phone interview with Han Ji-min as she was moving to her last filming on the 7th.

-You're filming even though Song-yeon is dead?
-Although she is dead, she comes out for a bit in Jeong-jo's imagination. If it's a scene of a memory, we can use a scene filmed before, but it's a fantastical scene where Jeong-jo meets Song-yeon, so we have to film it again.

-Thoughts on ending the drama
-For any work, there is meaning. When one work is done, I feel like I've climbed a mountain. But "Yi San" was a long drama, so it's on a bigger scale. In other words, it was a large mountain. It was a bigger role than in "Dae Jang Geum" and I was overwhelmed, but I was able to climb over the mountain because there were many seniors helping me. Just looking at the acting of my seniors taught me a lot.

-Was there anything difficult.
-There wasn't anything too difficult in the beginning as an artist. The speech wasn't historical so it was comparatively easy. But after entering the palace, I became a concubine, changed my speech, had a baby who died from a disease, and had my second baby die while pregnant. Acting out the change of mind in a short time was very hard. It wasn't easy to act out the aging process as a woman and the maturing process as a person. At these times, I was able to overcome the hardships with help and advice from Kyun Mi-ri.  -There was an article that you fainted while filming.
-In the beginning, my body wasn't well. But rather than fainting, I was just unable to film. During the later parts, I had only a few scenes, so I had a lot of time to rest. Now, I'm in great condition. Lee Seo-jin would have had it harder, who had to film on set two days, and film outside two to three days a week.   -How was filming the scenes up to your death?
-It was a little after resting due to the strike of actors' labor union, so my voice was extremely lively. My voice wasn't like a sick person's, so that day, I didn't sleep and stayed up wide awake. So automatically, I had dark circles and my voice was a little closed.

-The romance between Jeong-jo and Song-yeon was another fun part of "Yi San". Tell us your thoughts about romance scenes.
-There are people who ask me if I wasn't disappointed because the romance scenes were cut off in the middle. But looking at the drama as a whole, I think it's proper that a majority of it is about the political reformation against his opponents after he becomes king.

At first, it was also awkward to call Yi San 'king'. When Song-yeon was in pitiful situations, it was hard for me too. In that sense, it came naturally. As I thought about how to express the love I've felt since he was a prince, time flew by. The romance between Yi San and Song-yeon was passionate, and it was almost like present-day dramas. To Jeong-jo, who faced the risk of poisoning and conspiracy, Song-yeon was like a place of refuge.  Song-yeon's only love was Yi San. As Song-yeon, who knew of Dae-su's feelings, it was very unfortunate.  -The chemistry with senior actors.
-Lee Seo-jin jokes around a lot. But when we start shooting, he shows great levels of concentration. It's a little hateful. But he talks to me a lot about acting and takes care of me. But it is more comfortable to be with Lee Jong-soo than the king. It was comfortable to act with him. I also got a lot of advice from Kyun Mi-ri during the scene where I had to have the baby.  -If you were to really date a king.
-It's not very realistic. The queen loves her, and she gets pregnant the same time Hwa-bin, another concubine, does. There's nothing like that. In today's world, it's cheating. I was rather jealous. Before my character died, I wanted to go the grave of the real Song-yeon, but it was a private area, so I was able to go after my filming. Her grave was moved. Next to her grave is Hwa-bin's, and it was a strange feeling.

-Do you realize your popularity?
-I want to thank the viewers for the high ratings. I couldn't experience the public's reactions because I was busy filming. At the filming place in Yong-in, some elderly women called me 'Song-yeon'.

-How was it to be in the classical "Yi San" and be the MC for the modern "YunYeGa News"
-It wasn't an obstacle to the drama. Although YunYeGa News is not acting, it was a promise to them so I didn't give it up. Being the MC is very comfortable. I just need to show who I am.
-You seem very calm. Your real personality?
-I'm very optimistic. If I get into a hard situation, I argue that I learned a lot. I also like talking to my fans. There are many guys who ask me why I'm so tough when they meet me in person. I think my fans like the person I am on screen better.  -Resolutions and plans?
-I recognize genuine acting. I am happiest when I get this feeling. Acting that is lacking in genuineness is awkward and unnatural for me. I still lack many things but I will try to show genuine acting.   After this drama, I'm going to rest for a bit. I'm going to go to Australia with my parents to visit my sister. I haven't thought about the genre for my next work yet.

"[Interview] Han Ji-min, who finished filming "Yi San", interview "I wouldn't love a real king""
by HanCinema is licensed under a Creative Commons Attribution-Share Alike 3.0 Unported License.
Based on a work from this source