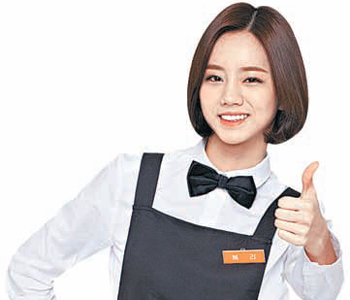 Hyeri (pictured), a 21-year-old member of K-pop girl group "Girl's Day", has got new nicknames thanks to her new commercial to call for decent treatment for young part-timers. In an e-mail interview with the Dong-A Ilbo on Tuesday, Hyeri expressed her feelings about the commercial series, saying, I hope the campaign can contribute to make a society where employers treat part-time workers like their own daughters and sons. This is the first time for the K-pop singer to express her thoughts on part-timers poor treatment after starring in "Albamon" (a domestic part-time recruitment site) commercials that have made known the minimum wage issue.

In the Albamons TV commercial that began in February, Hyeri shouted Part-timers have a right to protect! to publicize the part-time workers rights that are frequently infringed in the local labor market, such as "the legal minimum hourly wage is 5,580 won (approx. 5.1 U.S. dollars)" and "the night time hourly wage is 1.5 times of the daytime hourly wage". Korean netizens gave applause to the commercial and said, Young people may not know about Jeon Tae-il (a labor activist in 1970s whose suicide became the foundation of the Labor Standards Act), but they all know Hyeris minimum hourly wage of 5,580 won. The girl group member was awarded with the Labor Ministrys appreciation plaque for contribution to raise awareness on the minimum wage.

- You've done a great job. You let the public know about the minimum hourly wage and the night time wage.

While preparing for the commercial shooting, I came to know how much the minimum wage is and how more a part-time employee should be paid for night-time jobs. I hope more people come to know about the wages thanks to this campaign, as I did. I felt bittersweet after knowing the reality.

- Some employers have criticized the commercial.

It is hard for me to judge which side is right or wrong, as I havent been in both positions. But I believe it is a great deal if you are not paid as much as you should be after working hard. Also, I have a thought that the minimum hourly wage has not been increased in comparison to surging prices. If employers provide more sound work environment for part-time workers, their work efficiency would increase accordingly.

- If you have anything that you want to tell the part-timers of your own age?

I have many friends who have part-time jobs. Whenever I see part-timers of my own age, it makes me say `hi` or `thank you` appreciating their labor and services. I think they are awesome given their efforts standing on their own feet. If they keep the mindset that they had in the beginning, I bet they can achieve anything!

- What is your expectation on the decent treatment for part-timers campaign?

"[Interview] K-pop star, Hyeri turns into advocate for young part time workers"
by HanCinema is licensed under a Creative Commons Attribution-Share Alike 3.0 Unported License.
Based on a work from this source