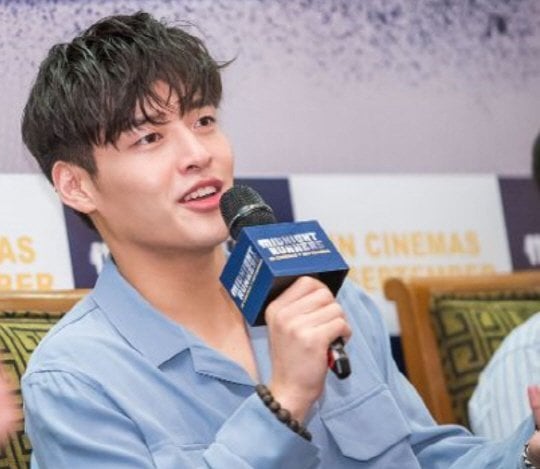 Kang Ha-neul was in Hong Kong and Singapore to promote the movie "Midnight Runners" with director Kim Joo-hwan. According local media, Kang Ha-neul responded to questions with eagerness.

For questions about girlfriends and visitors while he's away in the army, Kang Ha-neul said, "I am currently single. It would be nice to have someone wait two years for me and visit me while I'm away, but unfortunately there's no one like that. Director Kim Joo-hwan is going to wait for me". Director Kim Joo-hwan said, "We are currently talking about the sequel to "Midnight Runners" and I will definitely look for Kang Ha-neul and Park Seo-joon again.

About his ideal type, Kang Ha-neul said, "I like professional women. I like women who are hardworking and women who are easy to talk to".

There is a scene where he lies down on the legs of a woman with a skirt on and he claims it was chaellenging.

"It was so awkward and uncomfortable. I am awkward with talking to women in everyday life. I can't do it", he claimed. "Park Seo-joon has a better body than I do", he said about the half-naked scene in the movie. "It's not easy having a body like his. I don't want to be restrained by that".

Kang Ha-neul will join the Nonsan Training camp on the 11th of September. He will serve duty as military police and be discharged on the 10th of June 2019.

Meanwhile, according to Korean Film Commissions, "Midnight Runners" is currently at 6 million viewers. 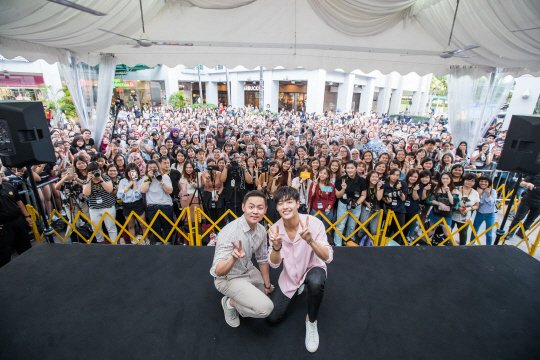 "[Interview] Kang Ha-neul, "I feel awkward talking to women""
by HanCinema is licensed under a Creative Commons Attribution-Share Alike 3.0 Unported License.
Based on a work from this source