[Interview #2] The four leads of "Descendants of the Sun", from heart throbbing to affection 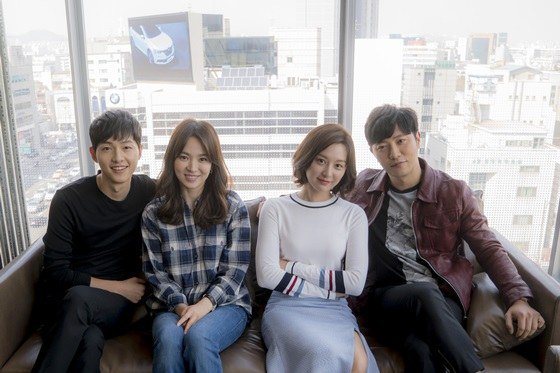 Song Hye-kyo and Song Joong-ki are one couple in "Descendants of the Sun" with an age gap and the second couple is Jin Goo and Kim Ji-won.

In the role of Seo Dae-myeong is Jin Goo. "I am twelve years older than Kim Ji-won". Although, he seemed very considerate of her. He said, "She's more thoughtful than I thought so it's easy to get along with her. She's bubbly on the outside so I had a lot of fun". 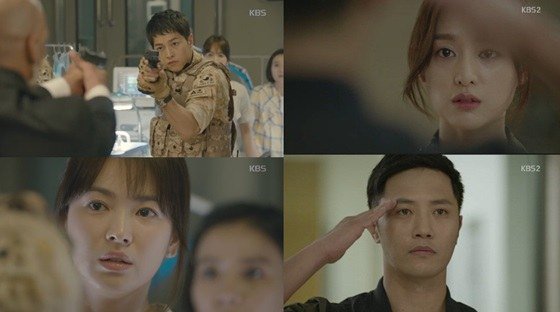 "Descendants of the Sun" shot everyone in the hearts with sweet lines. What is the greatest scene picked out by the four lead actors? Song Joong-ki said, "There was a line Jin Goo imitated until the end of the drama".

"There's a line at the end of the third episode saying, "Then save him". I wondered how I should say it to make it seem cool. The line was as if Yoo Si-jin put everything on the line for Kang Mo-yeon. After the making was over, Jin Goo kept imitating me. It became a trend for a while".

Song Hye-kyo chose the line "If you're a doctor, then you must not have a boyfriend because you're busy" as the best line. It is in fact, being parodied by netizens everywhere. Song Hye-kyo said, "It was a cheesy line when I first read it but that was when Kang Mo-yeon and Yoo Si-jin showed feelings for each other".

Jin Goo said, "My favorite is from where Lieutenant General Yoon (Kang Shin-il) told me to give up Yoon Myeong-joo, and I had to ask him if that was an order". Kim Ji-won says her favorite was when Yoon Myeong-joo who woke up at the hospital ordered Seo Dae-yeong to 'stop right there'.

"Descendants of the Sun" is successful but not without the criticism of being too romantic. Song Joong-ki said, "I would like to ask everyone to keep watching until the end. You will then be able to feel what's really inside. That's the reason I chose this drama and the reason I am proud of it".

The actors claim "Descendants of the Sun" is going to get better. They even revealed certain points to look out for.

Song Hye-kyo said, "The Song-Song Couple have gone beyond that flirting stage so I's going to get more interesting". Jin Goo said, "The drama is quick to turn to the next page. Every episode has a new story".

Kim Ji-won said, "Romance was strong until now but human drama starts when chaos overtakes the drama. It's going to be touching".

"Descendants of the Sun" is near 30% of the viewing percentage. Even more exciting episodes are going to entertain the viewers.

"[Interview #2] The four leads of "Descendants of the Sun", from heart throbbing to affection"
by HanCinema is licensed under a Creative Commons Attribution-Share Alike 3.0 Unported License.
Based on a work from this source